Kyogre (Japanese: カイオーガ Kaiouga) is a Water-type Legendary Pokémon introduced in Generation III. It is the Version Mascot of Pokemon Sapphire and Pokémon Alpha Sapphire. It is a Primal Pokémon as well.

It seems to resemble something like a giant, dark blue whale or orca. It has two large fins or "wings", each ending with four square-shaped "claws." It has a deep blue body and a white chin area with two spikes protruding under it. Above each eye are two white spots. It has markings on its wings which sort of resemble the letter A with a circle on the top. It also has two small dorsal fins on its back with two stripes running horizontally below the fins. The tail seems tattered with four trails, the inner smaller than the outer. It also has a mouth full of rarely seen sharp triangular teeth.

As Primal Kyogre, it is more than twice its usual size and has a deeper blue body, as well as having a partially translucent body with a golden light glowing from within it, essentially emitting bioluminescence. It has light blue stripes on its body, instead of the usual red. The four tips on both of its large fins remain pure white. The usually opaque middle parts of its large fins become transparent, with red marks on the closer two tips of both its fins that resembles the letter H, its four white oval spots, and the part of the top center of its head have a circular marking, where the lines are linked to upper end of the larger oval spots, now also transparent, and they stop at the end of its tattered tail, where the middle of the four trailing parts have the same color as the glow on the majority of its body.

Kyogre does not evolve. However, in Omega Ruby and Alpha Sapphire, it is capable of changing into its Primal Form.

Kyogre first appeared in the anime in Gaining Groudon!, and The Scuffle of Legends!, debuting with Groudon as well. Team Magma and Team Aqua were competing to gain both legendaries. Team Aqua, as it turned out, tricked Magma leader, Maxie by taking Kyogre even after they had Groudon. Kyogre also made an appearance in the ninth Pokémon movie, Pokémon Ranger and the Temple of the Sea where it was kind of like Manaphy's "steed."

Kyogre is obtainable in Sapphire, Emerald, and HeartGold through normal means. Trading a Kyogre into SoulSilver and showing both it and Groudon to Professor Oak allows the player to catch Rayquaza.

Kyogre's name originates from the Japanese word Kai, which means ocean. Kyogre's name ends in ogre, due to it being large. Without the "Ogre" part, it spells out Kaiō, which means King of the Sea. Also, Kaiō is the first four letters of the word Kaiōsei which means Neptune, the Roman version of the Greek god of the sea, Poseidon. 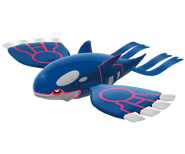