Undiscovered
Kubfu (ダクマ, Dakuma) is a fighting-type Legendary Pokémon introduced in Generation VIII. This Pokémon isn't normally found in the Galar region. Rather, the Kubfu the player meets comes from a faraway land and will train alongside them.

Kubfu is a small bear-like Pokémon. It has a dark-gray body. The feet have two toes shaped like triangles. It has three claws on each hand. On the chest is a white bow mark. The head has two spikes of hair on both sides with two more on the top of the head. The front of the head has a white streak with two spikes of hair and two black eyebrows. It has white eyes with black sclera and small brown spots. Two white hairs shaped like ribbons are located behind the head. It has a yellow mouth with a black round nose, and two little black marks.

Kubfu works hard to train both body and mind, even if it suffers defeat. It has a unique organ that allows it to create "fighting energy" through special deep breathing and intense focusing. It is known to live in mountains far away from Galar though it lived in the region at one point. According to historical texts, it helps people on their travels.

This Pokémon is hardworking and strives to train both its body and mind. It uses each defeat as motivation, training itself with even more vigor after a loss in order to grow stronger. It has an organ that produces “fighting energy” in its lower abdomen, and before heading into battle, it will increase this energy through unique breathing techniques and intense focus.

Wild Kubfu live in mountainous areas far away from the Galar region today, but it was once a species that called Galar its home. It's noted in historical texts that this species used to head to uncharted lands with people as they set out to trade or explore. Records suggest that the Kubfu living in faraway mountains today may have descended from Kubfu that became naturalized to the distant lands they visited in their journeys.

Kubfu evolves into Urshifu by finishing the trial at either one of Tower of Two Fists: Tower of Darkness or Tower of Waters.

Kubfu may be inspired by Akira Yuki. It is worth noting that James’ Japanese voice actor Shin-ichiro Miki also voices said Sega fighting game character since Virtua Fighter 2. Another Akira Yuki reference is that Kubfu’s evolution line debuted in the year 2020, befitting Akira’s alternate famous victory catchphrase instead of the usual “ten years” catchphrase, which is ”You are twenty years too early!!” from a Dengeki Bunko and Sega crossover fighting game Dengeki Bunko: Fighting Climax (Ignition).

Alternatively, Kubfu is also based off a bear cub and a martial arts student.

Kubfu is a portmanteau of "cub" (a juvenile bear) and "kung fu" (Chinese martial arts). 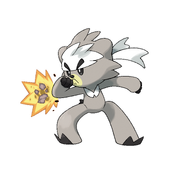 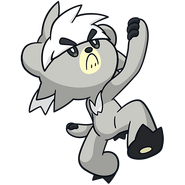 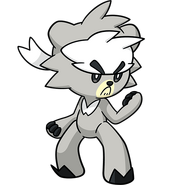