Krookodile is a large, bulky reptilian crocodile-like Pokémon. Its body is mainly brick-red in color, and covered in black stripes with pointed ends; it has a round gray belly. It has considerably large and razor-sharp teeth and claws. Around its eyes, there is a black patch resembling a bandit's mask, or a stylized pair of sunglasses. It somewhat resembles the dinosaur Baryonyx or Tyrannosaurus rex.

Krookodile is final evolution of Sandile, and evolved from Krokorok as of level 40.

Despite being named Krookodile, it is actually modeled after the Gavial, a species related to the crocodile. This is also reflected in its Japanese name, which is a combination of Waru, form the word warui, meaning bad, and Vial, from Gavial. It also somewhat resembles the dinosaur Baryonyx or Tyrannosaurus rex.

Krookodile's English name is derived from a corruption of the word "crook" (a villainous person), and "crocodile".

Its Japanese name is a combination of Waru, form the word warui, meaning "bad", and "Vial", from Gavial. 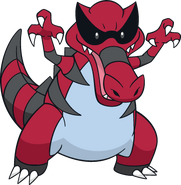