It is a bipedal crocodile-like Pokémon that is similar in many ways to its pre-evolution. Its body is the same shade of tan; it has a pink belly, with black striping showing through. It has become a biped, unlike its quadrupedal pre-evolution. Its tail is longer, and there are spikes along its spine. Its nostrils are more proportioned to the rest of the face than its pre-evolution, and its hind claws are now white. It has three clawed toes on each leg, and its teeth are more prominent, even when the mouth is closed. Its arms are less muscular now, presumably due to walking on only its back legs.

they seek out groups of five to seven members for aid in hunting and protection. These groups are led by females, who delegate hunting to males. They are nocturnal predators, though they are known to wander about during the day as well if they have not eaten for a while. As reptiles, though, they despise the cold, and will bury deep into the desert sand (where the day's heat is retained) on particularly chilly nights instead of hunting.

The black membranes covering their eyes develop a new function upon evolution; not only do they protect them from sandstorms and light (though because they are rarely active in the day this is hardly ever a factor), but they also grant Krokorok with infrared vision. This makes them superb hunters, even in the darkness of desert nights, as they can detect prey by their infrared signatures rather than by sight alone. Using their heat-sensitive eyes to locate unwary victims, packs can easily surround and corner their prey before their targets even notice. They will bury extra food in the sand as an emergency cache in case they fail to hunt down a meal in the future.

Because their masks vaguely resemble those of criminals, Krokorok are often portrayed as malicious in popular culture. In reality, though, Krokorok are not particularly sinister Pokémon despite how they are often depicted.

Krokorok is the evolved form of Sandile as of level 29. Krokorok evolves into Krookodile at level 40.

A Krokorok first appeared in "Dancing With the Ducklett Trio!" after the Sunglasses Sandile, appearing in "A Sandile Gusher of Change!" and "Here Comes the Trubbish Squad!". evolved into a Krokorok during a battle with Ash's Pikachu. It was later captured by Ash in "Battling the Bully!" and has been become a core member of his team.

Clay, the Gym Leader of Driftveil, uses a Krokorok in his gym battles. Ash fought this Krokorok with his Oshawott and won.

Krokorok's design appears to be based on both that of a crocodile, and possibly the on the Baryonyx, a dinosaur that resembles a crocodile. More specifically, this Pokémon is likely based on a Nile crocodile or a literal interpretation of the mugger crocodile, an actual species of crocodile. Its stripes and black eye markings make it resemble a burglar, with its eye markings resembling an eye mask. It may also be based on Sobek, an ancient Egyptian deity associated with thievery.

Krokorok comes from crocodile and rock. 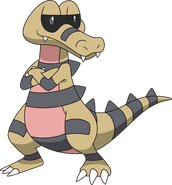 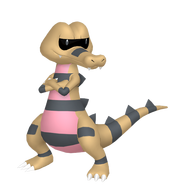 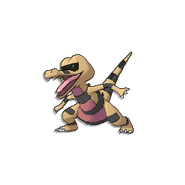 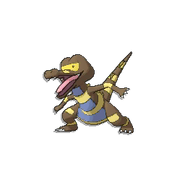 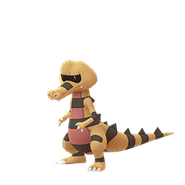