Silver
Kris, also known as Crystal, is the female playable character in Pokémon Crystal. She was the first ever playable female character in the Pokémon games. In the Generation IV remakes of Pokémon Gold and Silver (Pokémon HeartGold and SoulSilver), she was replaced by Lyra.

Kris is a slim and fit young girl with pretty, feminine eyes, fair skin, and spiky hair tied in low bunches behind her ears. (Both her eyes and hair are teal blue in her original appearance, but they are green in her Masters appearance). Clothing-wise, Kris wears a sporty, tomboyish outfit that consists of a yellow seamed-cap, a white jacket with red stripes on the cuffs, a crimson turtleneck sweater, yellow and black bike Lycra skinny-fit shorts, and red and white high-top shoes with black stripes. She also carries around a beige shoulder bag and keeps her Pokégear around her neck with a black necklace.

Kris in Pokémon the Series (anime) 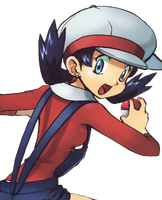 Kris's Back Sprite from Crystal

Kris artwork of her running
Community content is available under CC-BY-SA unless otherwise noted.
Advertisement