For the variant appearing in the games, see Korrina.

Korrina is a Gym Leader appearing in Pokémon the Series: XY.

Korrina hair is blond and has emerald-gray eyes and has a fair complexion. Korrina is wearing a typical skater attire, consisting of a white and red dress and black shorts underneath her skirt. In her left hand she holds the mega-glove, which has the same function as the Mega Ring. She also wears white boots with red heart decals which function as skates. When she isn't battling, she wears red sunglasses in place of her helmet and a gray v-neck over her top as well as white high tops with red wheels fitted in the bottom.

Korrina is a cheerful girl, who loves to exercise on her rolling skates, though sometimes causes comical mischief. She adores her Lucario, who grew with her since they were little. However, when Korrina Mega Evolved Lucario, she was in shock, as she couldn't calm Mega Lucario down from its wrath. Through training with Mabel, Korrina learned she needed to understand Lucario, as it went through the Mega Evolution transformation. She also respects her grandfather, even if she sometimes does not understand his strict principles.

Korrina first appeared when she jumped in front of Ash Ketchum and his friends and her Lucario later jumped in front of them aswell. She told Ash that he was her 99th challenger and Ash accepted the challenge. Korrina battled against Ash and his Pikachu with her Lucario and Lucario was able to defeat Pikachu. She then told Ash he wasn't strong enough to defeat the Shalour Gym. Ash didn't know what she meant by that and Korrina stated that she was the Shalour City Gym Leader. Korrina and Lucario joined Ash and his friends the lunch and Bonnie noticed Korrina had a Key Stone. Korrina then told that the Shalour City Gym Leader should have a Pokémon that is able to Mega Evolve and in this case, it should be her Lucario but they didn't have the Lucarionite yet.

Young Korrina with her Riolu

Korrina without her helmet

Korrina without her ponytail in her pajamas 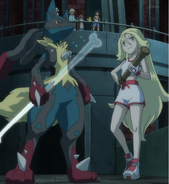 Korrina in her normal clothes
Add a photo to this gallery

Retrieved from "https://pokemon.fandom.com/wiki/Korrina_(anime)?oldid=789281"
Community content is available under CC-BY-SA unless otherwise noted.