Korrina in other languages

Korrina is tall and slender with very long creamy blonde hair tied in a big, thick, high fluffy ponytail that emerges from the back of her helmet. She has gray eyes and a fair complexion. Korrina wears a typical skater attire, consisting of a short white and red sleeveless dress over black cycling shorts and a white and red helmet on her head. In her left hand she holds the Mega Glove, which has the same function as the Mega Ring. She also wears white boots with red heart decals, which also function as skates.

When she isn't battling, she wears red sunglasses in place of her helmet and a gray V-neck over her top as well as white high tops with red wheels fitted in the bottom.

The name Korrina and her Japanese name, Koruni, may be a pun on "careening" (going fast without any control, usually leading to crashes, which may refer to her roller skates). It may also incorporate K.O. (short for "knockout") and "arena". Following the plant-based naming of most characters, her Japanese name may also originate from "corn" or cornichon, the French name for gherkin. 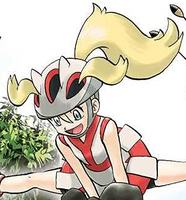 Korrina in the Masters trailer (anime) 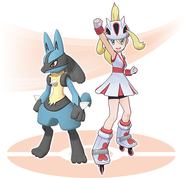