Komala is a Pokémon with a bluish-gray fur, with excess fur present on the neck. Its cheeks, tail and eyebrows are colored white. Komala has a large black nose, large ears, and black nails on its paws. Komala's underside is a light gray. The Pokémon is holding a cylindrical, brown log in the shape of a pillow.

This Pokémon is always asleep as its Pokédex entry in Pokémon Sun says, its attacking is nothing but it tossing and turning in its dreams. According to Principal Oak in the anime episode SM056: Let Sleeping Pokémon Lie!, when a Komala loses its log it will roll around uncomfortably in its sleep because it acts as a security blanket. A Komala is also picky about the log it receives. Trained Komala may instead latch onto their trainers’ arms for comfort, however.

One also reacts and changes expressions on its face in accordance to everywhere they dream about.

Despite their perpetual slumbers, however, Komala seem hazily aware of their surroundings; they seem to process outside stimuli within their dreams, as some sounds and physical touches register noticeably in their brain wave patterns. When these Pokémon are attacked, they will begin to flail about in the general direction that they sense danger.

Komala's saliva, when watered down, is able to cure sickness and insomnia in people. The anime episode SM056: Let Sleeping Pokémon Lie! reveals that any Komala is also immune sleep-based moves, such as Jigglypuff's sleeping song due to its sleep-like state.

Komala is based on a koala and their long sleeping habits. Koalas hug trees for shade, which is why Komala carries a log.

Komala is a combination of comatose (extremely sleepy) and koala.

Its Japanese name, Nekkoara, is derived from nekko (root) and koala. 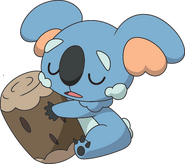 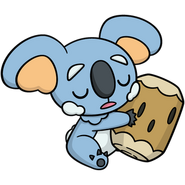 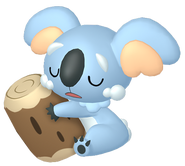