Koga served as the Gym Leader at the Fuchsia City Gym. Two years later, during the Generation II games, Koga also became a member of the Elite Four and his daughter, Janine took over his gym and used Poison-type Pokémon as well.

He specializes in Poison-type Pokémon, and as a Gym Leader gave out the Soul Badge for Trainers that could defeat him.

Koga is a man with black spiky hair. He usually wears dark ninja outfits, along with a red scarf.

Koga's appearance remains the same as it is in Red, Green and Blue.

Koga's appearance remains the same as it is in Gold and Silver.

Koga's outfit has purple outlines. He also wears protective grey bracers on his legs, as well as bands on his wrists.

Koga has black, spikey hair and bushy eyebrows. He is always wearing a red scarf over his mouth and nose. He has a purple ninja-style outfit, with black finger gloves and boots. He has a white belt around his waist.

Koga shows himself as an intimidating foe, using Poison-type Pokémon, whose moves poison or lull the opponent to sleep.

The name Koga originates from Kōga-ryū, a school of ninjutsu that focused on, among other techniques, poisoning.

Koga first appears in the games as the Fuchsia City Gym Leader. His gym was constructed with an array of invisible walls, fashioned into a maze. This forces the player to walk through the maze fighting Gym members, with the destination in the middle where Koga awaits.

Later, in the Generation II games, Koga has been promoted to Elite Four status. With the absence of a Gym Leader at Fuchsia Gym, Koga leaves the Gym under his daughter's care, Janine, making her the new Gym Leader.

In the remakes of the original games, Pokémon FireRed and LeafGreen, Koga is once again a Gym Leader, as it takes place during the same time period. The only difference is the level of his Weezing, and his updated appearance.

Koga in Pokémon the Series (anime)

Koga's VS sprite in Red & Blue

Koga's VS sprite in Yellow

Koga's VS sprite in FireRed & LeafGreen 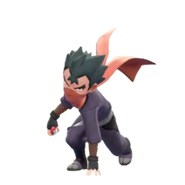