Plus
Minus
Hidden: Clear Body

Klink is a small two-headed metallic Pokémon that resembles a set of gears. It slightly resembles Magnemite and Magneton, except it appears to consist of two spinning gears. Both gears are identical and have an X for the right eye. Each gear's other eye is open and round with a black pupil, and it has a greenish dome-shaped center that appears to be its nose and a round, open mouth.

It can have Plus or Minus as its regular Ability, which boosts the stats of allies that has its counterpart Ability in a Double Battle. Its hidden ability is Clear Body which prevents any off stats from being lowered.

It can launch any of the 2 gears that make up its body-like projectiles when using Gear Grind or Shift Gear. It generates energy via spinning.

Klink are extremely close knit to the extent that they should not be separated at any cost.

Klink is based on a set of gears that interlock. As for the specific gears they are based on, they are either spur, helical or herringborne. Its shiny is based on copper gears, since their noses have turned green(the concept was later used for Copperajah‘s green skin)due to oxidation. It may also be based on the perpetual motion machine trimmed down.

Klink's name is based on the word "clink", a metallic sound. It might also include the word "link" as the gears are powerfully linked together, generating the energy they need to live. 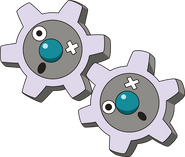 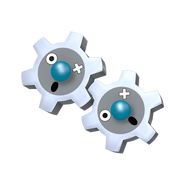 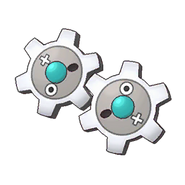 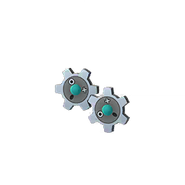