Klefki is a small, metallic Pokémon that resembles a key-ring with multiple keys dangling from its loop-like body. Its face is on the small round center part of its body that resembles a large key with a pink teardrop-shaped formation on its underside. It has a light gray face with a crescent-like marking, a pink spot on its forehead, tiny black eyes and a mouth that resembles a keyhole.

Klefki has a habit of collecting keys, especially master keys; it sometimes attempt to sneak into people's homes to obtain keys, and giving a key to it makes the Pokémon very happy. It never lets go a key it has collected, so people would entrust Klefki with the keys to vaults and safes to prevent crime.

Klefki is based on a keychain. It might also be based on how people would often blame fairies for the loss of small objects like keys (referencing its Fairy type).

Klefki comes from clef (French for "key"), kleptomaniac (a person or creature that collects random things, in this case keys), and key. 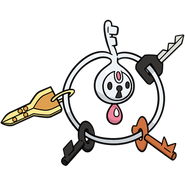 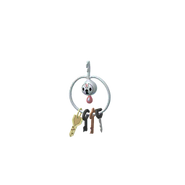 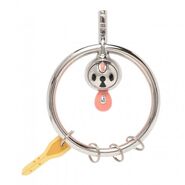 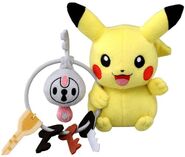