Kleavor resembles a bug covered in rocky armor. Its body is tan and black with various pointy stones decorating its body. It has two skinny arms with black shoulder armor and black axe-like stones replacing its scythes. It has two black, curved toes on each of its feet. On its back are two small, white-colored wings. Its face has two black-outlined eyes with black stones decorating its face like a mask, making up what resembles eyebrows and a chin guard. On the top of its head is a single diamond-shaped stone.

Kleavor are territorial creatures that use their blades to mark their territories by carving symbols on tree trunks. After marking their perimeters in this manner, they will fell trees in crisscross patterns to fill them in.

Kleavor often lose small chunks of their bodies to chipping over the course of battles. This chipping actually leaves sharp points behind, making these parts even sharper. Kleavor gauge the strength of potential rivals by the amount of chipping they possess. Because the discarded chips are also sharp, Hisuians frequently harvested them to fashion into weapons. Even today, caches of Kleavor chips are a common marker that archaeologists use to identify Hisuian settlements.

Due to special minerals found in the Hisui region, parts of Scyther's body have hardened into stone, causing it to evolve into Kleavor. This gives them strong rock armor and sharp edges around their body. The chipped rock that falls from Kleavor's armor used to be used as tools by the people of Hisui.

Kleavor also boasts two axe-like arms used for slicing. It uses them for a variety of tasks including marking territory, fighting opponents in battle, or carving symbols into trees.

Kleavor is evolved from Scyther when it is exposed to a Black Augurite.

Kleavor resembles a mantis with its arms shaped like battle axes. Its coloration also causes it to resemble the dead leaf mantis.

Kleavor may also be based on the Japanese idiom 蟷螂の斧 tōrō no ono (mantis's axe), an expression that describes a fearless but ultimately doomed resistance against another force. In Japanese, mantises are also alternately referred to as 斧虫 onomushi, literally translating into "axe bug".

Kleavor is a portmanteau of "cleaver" and "razor". 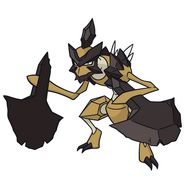 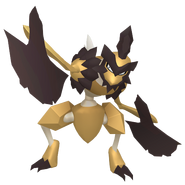