For the variant appearing in the games, see Kiawe.

Kiawe is a character appearing in Pokémon Adventures.

Kiawe is a young, muscular, dark-skinned boy. He has orange and brown hair, in a style resembling fire. He wears red shorts with a black outline and sandals with the same color scheme. He wears no shirt, though he does have some black cloth strips on his shoulders bound to his necklace, which has a small badge and feather decorations.

Kiawe is a determined, passionate trainer, who wishes to learn fire dancing. Like Sun, Kiawe also keeps track of how much money he has to pay to study fire dancing. He values his job greatly, and fears being fired from it.

Five years ago, Kiawe confronted Tapu Lele, who gave him a Z-Ring.[1]

Kiawe was employed at a store to earn the money to study fire-dancing lessons.[2]

Kiawe appeared alongside Mallow and Lana on Akala Island. They introduced themselves to Sun and Moon, the former being the Island Challenge participant. They wanted to know more about the participant and challenge him to find if he is worthy as the Island Kahuna have placed him, since nobody took on the Island Challenge for years. He sent Marowak to attack, while Sun was confused, since Hala never mentioned anything about Trial Captains. Kiawe confirmed this, as they came on their own accord to test Sun's abilities. Sun took on Kiawe's challenge and sent Dollar, who began retaliating against Marowak. Hearing from Lana Sun and Moon are foreigners, Kiawe became furious the Island Challenge was taken by people who aren't even from Alola. Sun kept encouraging his Dollar, else if they lost, their expenses wouldn't be covered. Kiawe heard this, as Sun claimed he entered the Island Challenge as a job to earn the money to cover his debt, and would do his job fully, with his heart, to end it. Kiawe was moved by this, and as Marowak was defeated, he was called by his boss. Kiawe begged the boss not to fire him, and managed to persuade them. Kiawe shook hands with Sun, as they both saw they were as equals. Mallow yelled at them for not continuing the battle, but Sun and Kiawe claimed the former would've won anyway. Kiawe confirmed Sun was okay to him and let him pass.[2]

Kiawe and Sun showed each other their bank accounts. They both realized how the other one didn't collect much money for their goals, but Sun claimed they should be courageous enough to continue. Kiawe had to return back to his store, the Thrifty Megamart, to continue working, and even offered Sun a job there. Sun wished to go there, but he had to continue on with the Island Challenge.[3] Kiawe was assaulted by Team Skull grunts, led by Gladion. Kiawe was overwhelmed by the latter, who asked of him to take them to the Ruins of Life. Kiawe barely managed to call Mallow, who heard the fighting, before collapsing. Sun, Moon, Lana and Mallow found Kiawe at Memorial Hill, and were ambushed by Team Skull grunts. While Lana and Mallow were fighting the grunts, Kiawe got Sun's attention, explaining these grunts were no match for the guy he had fought. Per request, Sun sent En; Kiawe took a crystal out of Litten's fur, and started explaining to Sun about the item's importance.[4]

Kiawe explained the item was a Z-Crystal, which had to be obtained to finish the Island Challenge. Lana and Mallow asked Kiawe to teach Sun, while they fought Team Skull forces. Sun called upon the Poké Ride Tauros and along with Moon and Kiawe, he rode off to the Ruins of Life. There, Kiawe recovered a bit, and explained he would teach Sun to use Z-Move, and recalled Sun did execute a Z-Move at the Full Force Festival, but the move was imperfect. Kiawe explained to use a Z-Move, one had to make a matching pose, have a Z-Crystal equipped and a Z-Ring on. Moon realized Sun had a Sparkling Stone, which could've been crafted into a Z-Ring; Kiawe confirmed this, and asked Sun to pay attention, as Kiawe made a pose for the Fire-type Z-Move. Sun hesitated, but was reminded by Kiawe and Moon he had to learn this, else he'd be defeated by Team Skull's enforcer. Sun repeated the moves, and as Kiawe went to correct him, he still felt the pain from the last battle. Still, Kiawe reminded Sun to train the poses. To do that, Kiawe asked of him to remember what he felt at the festival, a goal that he needed to finish. Since Sun did not have a Z-Ring, Kiawe decided to lend him his own, but reminded Sun it could drain his energy, and shouldn't overuse it, since he did pass out at the Full Force Festival after using the Z-Move. Sun managed to perfect the pose "for one million yen", surprising Moon and Kiawe how quickly he did that. Kiawe went to give Sun the Z-Ring, but the group was ambushed by Gladion and his Type: Null. Sun went to take Kiawe's Z-Ring, which Type: Null destroyed, and Kiawe became depressed. Kahili came and had Oricorio give Sun the Z-Ring, and Kiawe encouraged the latter to have En use Inferno Overdrive.[1]

Kiawe praised Sun for having En successfully execute Inferno Overdrive. After Gladion retreated, Sun went to attack him, but was stopped by Kiawe. He reminded there was no need to continue the fight, and was supported by Kahili, who sensed Gladion carried a great burden. Tapu Lele was rescued and emitted a powder, which cured everyone's injuries, including Kiawe's. Tapu Lele challenged the group to a fight, where Kiawe sent Marowak to combat alongside others' Pokémon. With Tapu Lele's defeat, the group met up with Mallow and Lana near Memorial Hill, and continued onwards.[5] Kiawe watched Moon win a battle against a Totem Lurantis. After the group met up with Professor Kukui, they went to Mallow's restaurant, where Kukui contacted his wife, Professor Burnet. The group exchanged information about the strange appearances of creatures around Alola from a crack in the sky, and noted Lillie's Nebby has some connection towards that. Mallow wondered if Team Skull was behind this threat, and while Kiawe doubted Team Skull was smart enough to orchestrate that, Lana believed it was why they hired the new enforcer for their organization. The group thought these creatures could likely be Pokémon, and the crack in the sky was the other dimension. After the meeting was held, Lana terrified others with her threatening look, as she wanted to infiltrate Team Skull's hideout and speak to the grunts. This terrified Kiawe, who stopped Lana and went to call his job to tell he was going to be absent. Mallow was displeased his job was more important than this quest, but Kiawe explained he was more afraid of Lana in battle and losing his job than facing Team Skull.[6]

Sun thought of Lana, Kiawe and Mallow upon seeing Acerola's badge, an another Trial Captain, who saved him and Lillie.[7] The trio went to Wela Volcano Park, where they spoke with locals about Team Skull's base. Once they went away from it, they found Team Skull grunts battling Aether Foundation employees, and joined in the fight to help the latter. Once Team Skull was defeated, the Trial Captains learned of their hideout, located on Ula'ula Island, in a shady house. Mallow contacted Ilima, asking him to join them on Ula'ula Island to take down Team Skull, as she, Kiawe and Lana sailed to that island, with Acerola awaiting them at the docks.[8] Acerola took Kiawe, Mallow and Lana to Po Town, where Team Skull's headquarters were located. Ilima and Hau joined the group near the town, and the former explained the latter had considerable persuasion skills. Kiawe and the rest came to the shady house, where Team Skull grunts blocked their path. Kiawe claimed they came to parlay, as the group requested Guzma's presence. Guzma arrived with Plumeria, and accepted their proposal, if they could battle their way out of the impeding danger, for three strange creatures surrounded the Trial Captains and Hau.[9]

With the arrival of the Ultra Beasts on Poni Island, Kiawe started his training to fight them.[14] He was on Exeggutor Island, when Mina, the final Trial Captain, arrived. As Hala was busy with other things, he put Nanu in charge of training the Trial Captains, but Kiawe doubted if he could be a leader model to them.[15] Under Nanu's supervision, Kiawe was training by battling Mallow.[16]

At Hokulani Observatory, Kiawe was touched that he got his Z-Ring again. Nanu reminded him instead of pretending to use Z-Moves like he did in the training, Kiawe could actually repeat using Inferno Overdrive. Sophocles led Kiawe and the rest to the Vikavolt airship, which he redesigned from the machine that could summon Totem Pokémon. Kiawe was suspicious about it, so Sophocles' Togedemaru electrocuted everyone to go inside. Inside, the group revised that the crack in the sky had been opened at Mount Lanakila, and suspected that Sun and Moon came out. Molayne reminded they would have to fight the Ultra Beasts, but exclaimed the importance of rescuing Sun and Moon out of there. Suddenly, the airship got hit. The Vikavolt airship crashed, as they were attacked by the Ultra Beasts, and the Aether Foundation employees.[17] With the arrival of the four Guardian Deities, Kiawe went out of the aircraft and started to battle the Ultra Beasts. He confronted Pheromosa, and had his Marowak use Inferno Overdrive Z-Move, which defeated Pheromosa. He started crying, for after a long time, he finally used a Z-Move. Seeing Mallow defeating a Pheromosa, too, Kiawe reported the success to Nanu.[18]

Several months after the Ultra Beasts threat had passed, Kiawe and two other guys joined Sun in his courier delivery service. Kiawe was saving money to study abroad.[19] 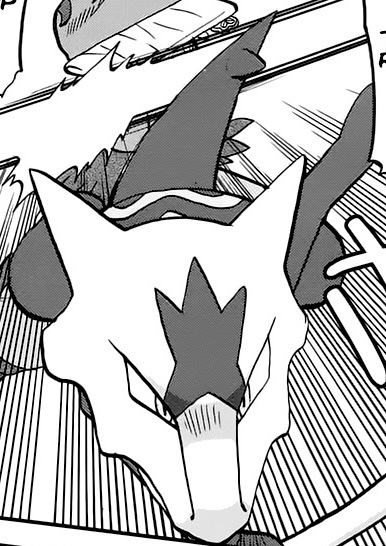 Retrieved from "https://pokemon.fandom.com/wiki/Kiawe_(Adventures)?oldid=1262408"
Community content is available under CC-BY-SA unless otherwise noted.