Kiawe is a Trial Captain that specializes in Fire type Pokémon. Kiawe appears in Pokémon Sun and Moon.

Kiawe is a young, muscular, dark-skinned boy. He has red and brown hair, in a style resembling fire. He wears red shorts with a black outline and sandals with the same color scheme. He wears no shirt, though he does have some black cloth strips on his shoulders bound to his necklace, which has a small badge and feather decorations.

At first glance Kiawe comes off as grumpy and short-tempered. But underneath his searing exterior, lies a mature and calculative individual.

Kiawe appears in the Sun and Moon anime series. 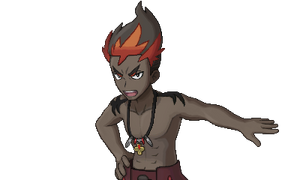 Kiawe's VS sprite in Sun & Moon

Retrieved from "https://pokemon.fandom.com/wiki/Kiawe?oldid=1284367"
Community content is available under CC-BY-SA unless otherwise noted.