Khoury in other languages

Khoury is a Trainer from Johto who is friends with Lyra. He wants to be a Pokémon Breeder like Brock. His father was in charge of the Johto festival.

Khoury is an aspiring Pokémon Breeder. While he has lots of knowledge about Pokémon, he can sometimes be insecure and panic in stress situations.

Lyra met the heroes as she was trying to get her Marill unstuck, and introduced them to Khoury. His Totodile was not quite friendly, so Brock gave it some berries along with its food, which made Totodile happy. Khoury was amazed, and asked of Brock for his recpies, which he promised to lend it to him. After getting some ice cream from Khoury's father, Khoury reminded Lyra of the festival show, to which Lyra sent Chikorita, Cyndaquil and Totodile - Johto Starter Pokémon. After Lyra gave Dawn the Egg for winning a battle against her, the Egg was quickly snatched by Team Rocket, so the group went to find them.

Since Team Rocket has gone missing, the group split up to cover more ground. As Ash, Brock and Khoury found the trio, Khoury's Totodile launched Water Gun, so Dawn and Lyra could see their location. Soon, Lyra's Marill and Khoury's Totodile launched Water Gun to blast them off and retrieve Dawn's Egg back. Once the group returned, Lyra and Khoury admitted they wanted to join Dawn and others to see her performance in Lilypad Town. After given permission, Lyra and Khoury watched as Dawn's Egg hatched into a Cyndaquil.[1]

As the group was watching Cyndaquil's first battle, Khoury noticed Lyra's Marill went missing. Across a hill, the group went to Valley Windworks, where Marill likely went to. Entering it, they informed a guard of the lone Marill, who saw on the screen that it went to the basement. Lyra went and obtained Marill, but as Team Rocket interfered with the power, the doors got stuck - nobody could open them. Khoury began to panic, for he was unsuited at being in shut spaces, whereas Lyra began to wonder about her life. She asked Dawn if Ash was her boyfriend, which made Dawn hysteric. Later, as the group tried to open the door, Lyra had Girafarig use Double Hit on the door, which didn't budge.

She asked Khoury to give it a try, but he refused, thinking that he wouldn't be able to do anything if the others have failed already. Ash nevertheless tried to open with a crowbar, to which Lyra pointed out that Khoury could learn something from him. The group took a break by eating cookies, until Pikachu used Thunderbolt to attack Team Rocket, causing the doors to open once more. The group reunited with their Pokémon and went out of the facility. Team Rocket ambushed them in a giant machine, but they were oveloaded with electricity, so Pikachu's Thunderbolt easily blasted them off.[2]

Hearing a group of Trainers encountered a wild Gible that attacked them, Ash wanted to catch it, so Khoury and others followed him. As a boulder fell near them, the group encountered the lone Gible. Khoury wanted to catch it, too, so he sent Totodile to attack it, only for Gible to sweep them away with Sandstorm. As Gible went away, Lyra went with Ash, leaving Khoury with Dawn. The former gave Dawn a fishing stick, placing some food to bait Gible. However, Khoury got Dawn's Piplup baited on. As Gible returned, Khoury had Totodile attack it, only for Totodile to bump into Ash's Buizel, causing Gible to escape. Having no other ideas left, Ash and Lyra joined Dawn and Khoury, by using the fishing stick method.

After a while, Dawn pulled Gible out of the river. Khoury pulled her away to prevent her from getting hurt, which Lyra believed that to be a romantic gesture. Gible shattered another rock before escaping, so Lyra had Marill trace its whereabouts. Going in a cave, Ash ran off, but nearly fell in a hole made by Trapinch. Khoury pulled him out, and moments later, Dawn started arguing with Ash. Khoury tried to calm them down, to which both Ash and Dawn asked him to shut up, making Lyra wonder if she was meant for Khoury. Returning to the cave, Lyra's Marill continued to trace Gible's whereabouts, though Ash and Lyra got separated from Dawn and Khoury. Ash had Monferno use Dig, which made Diglett and Dugtrio chase after the two. In the confusion, Lyra and Khoury split from Ash and Dawn.

Khoury called Lyra, promising he'd soon find her. Lyra tapped the walls, allowing Khoury to find her, and the two soon found Ash and Dawn as well. Despite Ash still wanting to catch Gible, Khoury felt they should get out of the caves: he licked his finger and lifted it up, feeling the breeze to find a way out. This made Lyra start liking him. Coming out, the group encountered Gible once more. Ash wanted to battle it, but Dawn and Lyra convinced him to give Khoury a shot, who sent Totodile to battle it. Khoury had Totodile battle Gible, and show off its strength, causing Gible to hit its head to prove its strength as well. As Gible was injured by this, Khoury tossed a Poké Ball and caught Gible. At the end of the day, Khoury and Lyra learned of a Contest in Lilypad Town, and proposed Dawn to enter it.[3]

As Ash and Dawn were training, Brock explained to Khoury about Grotle swallowing Energy Ball. During the Contest, the group visited Dawn, remarking her confidence. Khoury and Lyra then continued to watch Dawn's performance.[4] The group stopped at the collosseum at Lilypad Town, where many Trainers come to test themselves in battle. Since this was Lyra and Khoury's last day in Sinnoh, Lyra asked for a Tag Battle with Khoury against Ash and Dawn. The latter two accepted, but Brock felt they should pay their respects first. Looking at a statue of Dialga and Palkia, the group touched the statues, feeling that the powers would grant them their wishes. Lyra admitted she wished to go with Khoury to Johto and win the Johto League. In that moment, Team Rocket emerged from the ground with their robot and snatched Pikachu and Piplup. The group went after them, and split to cover more ground, with Khoury giving Ash and Dawn two Pokégears to contact each other.

Brock, Khoury and Lyra took a direction, where Khoury noticed a group of Pokémon were sent out, feeling Team Rocket went there. The group faced Team Rocket, who was surprised to see their location was discovered. Ash and Dawn arrived as well, having Ash's Staraptor free Pikachu and Piplup, who blasted Team Rocket off. Returning to the collosseum, Ash and Dawn paired together to battle Khoury and Lyra. Ash sent Monferno and Dawn her Cyndaquil against Khoury's Totodile and Lyra's Chikorita. Khoury was uncertain why Lyra chose Chikorita, to which she felt it was special, and reminded as long as they worked together, they had a chance at defeating their opponents. Chikorita used Light Screen to protect itself and Totodile, and the latter fired Water Gun to strike Monferno. They also used Razor Leaf and Aqua Tail, striking their opponents.

While Monferno's Mach Punch and Cyndaquil's Swift did heavy damage on Totodile and Chikorita, the two stood up, and even Totodile evolved into a Croconaw. Despite firing Hydro Pump to wound Cyndaquil and Monferno, the latter's Mach Punch defeated it, while Cyndaquil's Flame Wheel defeated Chikorita. Despite losing, Brock applauded Khoury and Lyra for their teamwork. As they received a call from Khoury's father, Khoury and Lyra went to the airport to depart to Johto. Khoury, much to Lyra's surprise, wanted to join her to support her in the Johto League. Brock advised Lyra to face Whitney and Morty for her next Gym Battle. Lyra wished Ash and Dawn luck in their Sinnoh League and Grand Festival tournaments, and departed with Khoury and his father.[5] 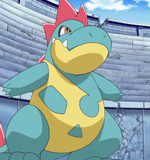