Ken Sugimori ( Sugimori Ken), born on January 27, 1966, currently sits on the Board of the Pokémon Company and also acts as Art Director for the franchise. He is responsible for drawing the majority of the official artwork for every Pokémon.

Sugimori became friends with Satoshi Tajiri in early 1981 when he began illustrating for Tajiri's Game Freak magazine. In the beginning he submitted work on a freelance basis, as he wanted to pursue a career as a manga artist, but later he joined the company as an employee. Tajiri and Sugimori formed their own game development company, named after the magazine, in 1989, also, in 1995 both they created Pokémon.

Sugimori is usually credited with designing and drawing the 151 original Pokémon himself. However, this is incorrect; Sugimori designed as part of a team but was chosen to draw all of the official artwork as the company wanted to give the series a uniform style. He based his artwork for Red and Green on the game sprites, as it was the only artwork covering all 151 Pokémon available at the time.

For Pokémon Black and White, Sugimori directed a team of 17 people in designing new Pokémon for the games, although he always drew the final designs.

Outside the scope of Pokémon, Sugimori has contributed to many other creative projects. These include: 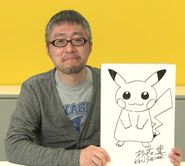 Sugimori in a 2014 promotional video. 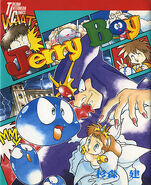 The cover of the Jerry Boy manga.

The Quinty manga.
Add a photo to this gallery

Retrieved from "https://pokemon.fandom.com/wiki/Ken_Sugimori?oldid=1408719"
Community content is available under CC-BY-SA unless otherwise noted.