Kellyn is a Pokémon Ranger in Shadows of Almia.

Kellyn has brown hair with two plucks pointing upwards on the top. He also has green eyes. He wears the Ranger school uniform before he graduated and the Ranger uniform when he became an official Ranger.

Kellyn cares a lot about Pokémon, which is the reason he decided to become a Pokémon Ranger.

He is actually from the Fiore region but he hopes to become a Pokémon Ranger that is why he moved to Almia. He is the youngest of the trio, at the age of twelve while Keith and Rhythmi are seventeen and fourteen respectively; though other sources say he is sixteen; the same age as Solana. His counterpart in the game is Kate.

Kellyn's mission was to bring Riolu, who was able to use Aura Sphere, home after being used by other people. While on mission, he encoutered the heroes who helped him to complete his mission.

Sprite of Kellyn in Ranger School.

Back Sprite of Kellyn in Ranger School.

Sprite of Kellyn in Shadows of Almia.

Back Sprite of Kellyn in Shadows of Almia.
Add a photo to this gallery 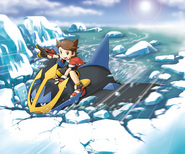 Riding Empoleon on Ice Cave.
Add a photo to this gallery
Retrieved from "https://pokemon.fandom.com/wiki/Kellyn?oldid=1051317"
Community content is available under CC-BY-SA unless otherwise noted.