Kecleons resemble a chameleon. The main color on a Kecleon is green, the second most color is yellow and then they have a red zigzag stripe on their chest. The spikes on its head is yellow like the circles on by its eyes.It has a curly tail and small yellow feet.

Kecleon have the ability Color Change. This allows Kecleon to change its type to the same type as the attacks that hit it. Kecleon has the ability to blend in with its surroundings. Only the red stripe on its chest remains visible at all times. It can sneak up on its prey and use its long tongue to trap it.

Kecleon does not evolve.

Kecleons are one of the most powerful Pokémon in the Mystery Dungeon games. If you shoplift it, it automatically has the move Agility set, and has Color Change, which changes its type by the move you use. To recruit it, you have to have to be Level 90 or higher with a Friend Bow (shoplift to encounter). In Diamond, Pearl, and Platinum, after you obtain the National Pokédex and open Pal Park, show a Kecleon to a girl and she will give you the Color Changer App on your Pokétch. This app enables you to change your screen color from green to anything.

In the Johto region championship a trainer named Harrison had a Kecleon which was defeated by Ash Ketchum's Pikachu. It also in the Special Red\Blue Rescue team Go Getters as the Kecleon Brothers. They have the same role as they do in the video game; shopkeepers. It also appears in the short Pikachu's Pikaboo.

Kecleon is based on a chameleon. 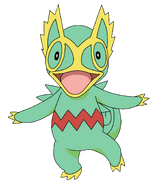 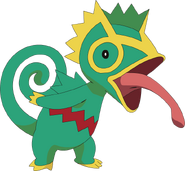 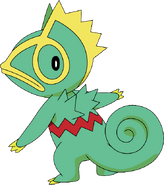 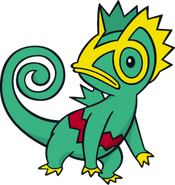 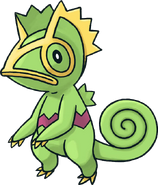 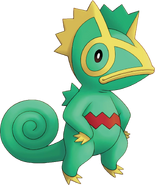 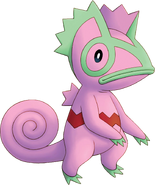