Keanan is a character appearing in Pokémon the Series: XY Kalos Quest.

Keanan is a ranger of the swamplands in which Ash's Goodra lived as a Goomy. One day, a Florges, with an army of bug-type Pokémon, attacked the homelands, claiming a part of the territory. Later, when Keanan was passing by, he noticed Goodra and recognized it to be Goomy, who had evolved. He took the heroes and Goodra back to the swamplands, explaining what happened. Ash wanted to battle Florges, but Keanan stopped him, since this is a problem only Pokémon must face, but allowed Ash to at least cheer for Goodra. After the battle, Goodra was injured by Shadow Ball and Psybeam; Clemont reported this to Keanan, who got suspicious, since no Pokémon should know Shadow Ball and Psybeam. During the night, Ash's Pikachu, Clemont's Dedenne and Wooper (who was Goodra's friend) were abducted, so the heroes went after them, while Keanan realized someone was stealing the water from the swamplands.

The heroes encountered Team Rocket, who flew off with the water and the captured Pokémon, Pikachu, Dedenne and Wooper. After Ash arrived on their airplane with Goodra and Florges and defeated them, Keanan was saddened by the fact the swamplands will dry off without water. Goodra used Rain Dance and Florges used Grassy Terrain, reviving the swamplands, allowing Keanan to continue protecting the place.

Keanan was seen watching the Pokémon Showcase Master Class on television along with the Pokémon from the marshlands. He also voted for the best performance for each round.

During the Kalos League, he appeared in his truck to give Goodra back to Ash before his semifinal battle with Sawyer. 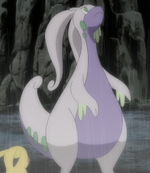