Katrina (カツコ Katsuko) is a character of Pokémon: Indigo League.

When Ash is looking for a place to train for the Pokémon League, he meets Katrina who then challenges him to a batte. Before the battle can commence, Team Rocket tries to steal Ash's Pikachu and Katrina's Raichu. After defeating them, Cleavon Schpielbunk appears and offers both Pokémon a role in his movie Pokémon in Love.

After the audition, Pikachu and Raichu both land roles in the movie as well as behind the scenes work to help create a thunderstorm. After the movie is over, Katrina and Ash express excitement at entering the Indigo Plateau Conference. 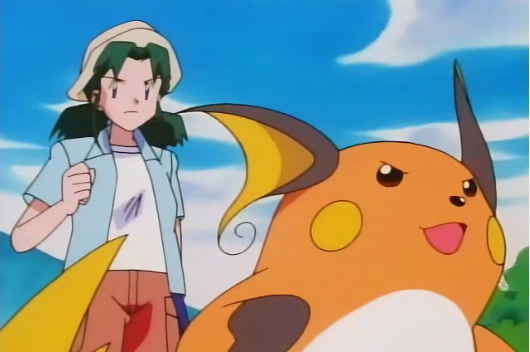 Katrina and Ash getting ready to battle
Add a photo to this gallery
Retrieved from "https://pokemon.fandom.com/wiki/Katrina_(IL071)?oldid=1028614"
Community content is available under CC-BY-SA unless otherwise noted.