Katie was the first opponent that Ash battled in the Ever Grande Conference victory tournament.

Katie is the pride of Lilycove City, where she has the nickname "cool beauty" because of her fashion and flair. Her hobbies include playing the clarinet and her favorite food is spicy spaghetti with Tamato Berries. In battle, she is known for most commonly using Venomoth and Golduck and is known for carefully analyzing her opponent's moves.

Katie's battle style was different from many other typical Trainers in the anime. Instead of sticking with one Pokémon in battle until it fainted, she would switch out her Pokémon for a stronger one if hers had a disadvantage. It was due to this strategy that she nearly defeated Ash in the first part of their battle.

During their battle, she took out two of Ash's Pokémon without having any of hers faint. Ash was finally able to take out her Dugtrio with his Glalie. However, the Ice-Type was soon defeated by her Misdreavus' Destiny Bond.

However, Ash was able to turn the battle in his favor using his three remaining Pokémon. His Corphish took out her Golduck while confused, and from there, he eventually defeated Katie and moved on in the Victory Tournament. 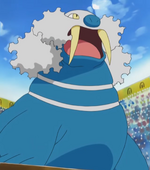