Kartana (カミツルギ, Kamitsurugi) (codenamed UB-04 Blade) is a Grass/Steel-type Pokémon introduced in Generation VII. It is one of the two UB-04, the other being Celesteela.

Appearance wise, it seems to be an origami folded humanoid. The paper used is orange on one side and white on the other. It head is tucked into its body with a 4 pointer star(presumably its face). It appears to have either two yellow horns/antennae that become wider when moving upwards. Its arms resemble drawn katanas with yellow/white sheaths. It has creased legs.

While Kartana may be regarded as tiny and not powerful, it is highly dangerous due to the fact that it could cut anything due to being infinitely sharp and thin. This has been displayed in an incident in which a Kartana cut down a steel tower with one stroke, possibly without effort.

Kartana was the last known Ultra Beast to appear the anime. It was seen slicing up things around Melemele Island, and was very hard to catch by the Ultra Guardians. It eventually saved Alola by slicing up a meteor Rayquaza and Deoxys accidentally sent towards it. It is capable of speaking human language albeit it is in reverse.

Kartana appears to be based on an origami sculpture, a craft usually made by folding paper into different shapes. Many of its features resemble paper-made objects with its face resembling an origami fortune-teller, it's body resembling a chopstick wrapper, it's legs resembling the wings of an origami crane, and it's frills and arms resembling closed paper fans. Its Grass type could be based on the Kusanagi-no-Tsurugi (meaning "grass-cutting sword"), a sword that is one of the Three Sacred Treasures of Japan or the fact that paper is often made of trees. It is also based on samurai katana blades, known for their sharpness. It may also be based on a praying mantis. With the theory that the original seven Ultra Beasts are based on the Seven Deadly Sins, Kartana may be based on the sin of wrath, as it usually cuts objects fiercely, sometimes without reason. This is even stated in its Pokédex entry in Pokémon Moon where it is shown to cut down a steel tower.

Considering that it is an origami figure, it is either a noshi (good luck charm/ceremonial congratulations) or shikigami (a figure imbued with spiritual power that is used to ward off evil spirits). It's also a visual pun on the term "paper cut."

Kartana may be a portmanteau of 刀 (katana, Japanese for "sword", but more often refers to Japanese-style single edge swords), charta (Latin for paper), art, and possibly カルタ (karuta, traditional Japanese playing cards and/or games played with said cards). Kartana also happens to be the Sanskrit word for "cutting." 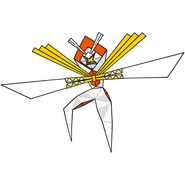 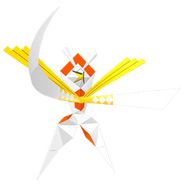