Nell Balaban, also known as Karen Neill, is a musician and actress affiliated with 4Kids Entertainment and NYAV Post who provided voices for the Pokémon anime beginning in Season 6. She later replaced the departed Megan Hollingshead as Caroline for Seasons 7 and 8. Outside of Pokémon she is best known as Ishizu Ishtar from Yu-Gi-Oh! and the original voice of Karai from Teenage Mutant Ninja Turtles.

She has yet to appear in any episodes dubbed by TPCi. As a result, Klara Leopold has filled in for her in Caroline's sole appearance since then. 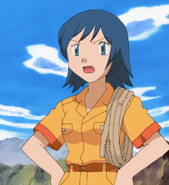 Elisa
Add a photo to this gallery
Retrieved from "https://pokemon.fandom.com/wiki/Karen_Neill?oldid=1071399"
Community content is available under CC-BY-SA unless otherwise noted.