For the variant appearing in the games, see Karen.

Karen in HeartGold & SoulSilver arc, and in Crystal arc.

Karen is a character appearing in Pokémon Adventures, who is a member of the Elite Four.

Karen has silvery-blue eyes and long silvery-blue hair that reaches past her waist with two long bangs that frame her face.

When she was young, Karen wore a white mask to conceal her identity, being trained by the Masked Man.

She wears a black dress that hugs her curves and black flats.

She wears a yellow spaghetti strap cropped tank top that reveals her flat midriff, and white knee-length pants with yellow beads. She also wears yellow high heels on her feet. Her tank top has four straps, two on each side that strap over her bare shoulders.

Karen has a cruel personality, as shown when she willingly sided with the Masked Man, but under the guise that they were kidnapped alongside the others. She is shown to despise Green for her ornithophobia (fear of birds).

The name Karen could be an anagram of the word "darken", excluding the 'D'. It could also incorporate "scare".

Her Japanese name, Karin, could originate from Kali, a Hindu goddess associated with night and destruction. Following the plant-based naming of most characters, it could also literally be 榠樝 (karin, the Japanese name for the Chinese quince).

Karen was willingly recruited alongside Will into the Masked Man's service.[1] All of Masked Man's children were chosen, based on their gender, age, talents and birthplace.[2] Together, along with Sham and Carl, watched as Ho-Oh took Green to the Masked Man, who placed the mask on her and took Green in his group by force.[3] Will and Karen trained together, per the Masked Man's proposal, and all were to wear masks.[4]

Karen appeared at Ilex Forest to confront Green alongside Will. As Green prepares to attack Karen with her Snubbull, she used her Umbreon to incapacitate it. Karen revealed that the two of them have been instructed to guard the shrine from any intruders, and that the Masked Man would gain the ability to manipulate time. When Karen summoned Ho-Oh onto the scene, she also grabbed Green's hand and forced her to cower in fear.[6]

She attempted to use it to force Green to hand over the two feathers. Karen knocked her onto the ground, as Will revealed to Green that Silver was defeated easily by the two of them. As Green ran over to Silver and prevented him from falling, Karen asked whether their touching moment has ended. Enraged, Green stood her ground against the advancing Ho-Oh, much to Karen and Will's surprise. Karen ordered Ho-Oh to circle back and attack Green, but the attack was countered by Zapdos, Moltres and Articuno. She instantly took to Ho-Oh's back, as Will does the same with Lugia. Karen then attacks the three birds with Ho-Oh, as the opposing factions engage in battle with one another.[3]

When Red and Green arrived on the scene, they assisted Green in her battle against Karen and Will. Before long, Green noticed that Karen was no longer riding atop Ho-Oh, to which Karen revealed that she was clinging onto Moltres' back the entire time. Once Green's Bull attacked her Umbreon Karen then used her Umbreon's Moonlight to heal itself, then send Green's Snubbull hurtling back to Green. She mocked Green's current situation, who lurches precariously off Moltres' back. Will, however, lost against Silver and told Karen he would retreat and abandon the Masked Man.[7]

After the battle, Karen rescues an unconscious Will, flying away with aid from her two Murkrow. She noted how powerful those trainers were when united, but wondered what she and Will would do, after they abandoned the Masked Man. They were then approached by Koga and Bruno, who invited Karen and Will to join their organisation.[8]

Despite their villainous past, the Elite Four went to the Pokémon Association. The two sides made a deal, for the crimes of the Elite Four would be overlooked as long as they served their purpose: to challenge wholesome trainers at the Pokémon League and the Pokéathlon Dome, and sponsor the two events.[9]

As Gold announced he'd take on the throwing challenge at the Pokéathlon Dome, the Elite Four approached him. Gold looked at Bruno, Will, Karen and Koga, but he didn't recognize them, much to their shock. Whitney scolded Gold, as these were the Elite Four. Karen and Whitney remained behind to watch Gold, Koga, Bruno and Will take on the Circle Push, Block Smash and Goal Roll challenges. However, Gold won the Block Smash one, to which Whitney and Karen applauded him. However, he admitted that he came to the Pokéathlon Dome to find Lance, who had information on Arceus.[9]

The Elite Four wondered about Lance or Arceus. Gold explained that Oak had sent him, due to Lance's cryptic message. Gold boasted that Oak begged him to go on the mission, but Whitney and the Elite Four thought that he was just a substitute. Will and Karen wondered why was Lance late, and suddenly, a Dragonite appeared. They observed as Gold sent Togebo when Dragonite used Hyper Beam, which hit Gold. Gold showed that Togebo used Double-Edge, which defeated Dragonite instantly. Karen noted that though Togebo's Poké Ball got damaged, the Pokémon itself withstood the Hyper Beam attack. She also noticed that Dragonite was badly wounded, because it suffered an attack before it arrived to the dome. Since Lance was nowhere to be seen, Karen and the rest watched as Gold went with Hiro to the former's home.[10]

Silver, who spoke to Eusine, remembered Karen, as she was one of the children whom the Masked Man had captured.[11] Gold remembered the Elite Four during his battle with Arceus. He noted they were thinking of him as unreliable, just like he was looking down on Togebo, and swore to change that by battling alongside Togebo.[12] Karen, Will and Koga watched Bruno, and noticed he was gaining weight as he was eating Rage Candy Bar.[13] 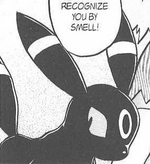 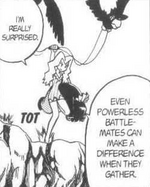 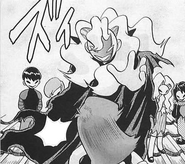 Karen appearing before Green at the Bell Tower with the Masked Man.

Karen uses Green's fear of birds against her.