Route 5 is a route in Kanto that connects Cerulean City in the north to Saffron City in the south. There is also a Pokémon Day Care located here.

Route 5 is surrounded by trees on the eastern and western sides and has two entrances leading to Saffron City, which are separated by a contoured hill at the center. Both of the roads merge on the southern side and lead to the entrance of Saffron City. In the early stages of the game, the player character has to travel to Vermillion City through the Underground Path, which is located on the southeastern part of the route.

The contoured hill, surrounded by patches of grass and trees on the northern side, is located at the center of the route. This area can be accessed by traveling from the southern side of Cerulean City with the use of Cut or by using Rock Climb. A blue-roofed house, which was formerly a Pokémon Day Care, and stairs leading to a ledge, through which the player character can shift to the main path, is found on the southern side of the area.

Route 5 appeared in The Path to the Pokémon League, The School of Hard Knocks and Bulbasaur and the Hidden Village when Ash and co. traveled through the Hidden Village to head to Vermillion City. They were making their way across an old bridge when Brock fell off the bridge into the river. When Ash and Misty, who were looking for Brock, accidentally sprung a trap and got caught in it, Brock helped them get out of it with the help of Melanie. They were taken to the village by Melanie, where she introduced them to Bulbasaur, who had volunteered himself to guard the village. After saving the village from Team Rocket, Melanie asked Ash if he wanted Bulbasaur to come and join his team, to which Ash agreed and captured it. 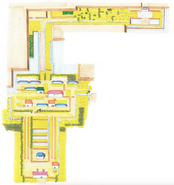 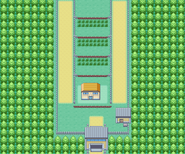 Kanto Route 5 in FireRed and LeafGreen.