Route 24 is a route in north-eastern Kanto, with Route 25 to the north, and Cerulean City to the south. Most of Route 24 is the Nugget Bridge. The player will be challenged by five trainers one by one and after defeating all of the trainers on the bridge, a disguised Team Rocket Grunt will give the player a Nugget and then offer the player a position in Team Rocket. The player automatically refuses the offer, and battles the grunt. In Generations I and III, the Rival will ambush the player for a battle to the south of the bridge.

(If Pikachu is happy)

In Charmander - The Stray Pokémon, Ash and his friends travel there while on their way to Vermilion City. 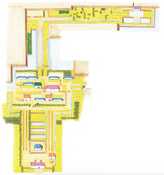