Kanto Route 1 is a route in the Kanto region.

In Generation I and Generation III, there are no opponent trainers to battle against. After you make your way to the area which is blocked by the first ledge, you can find a man working for the Poké Mart, who gives you a free sample Potion.

Route 1 appeared in Bulbasaur, Come Home! when Red and Professor Oak were shown to have travelled to Viridian City, passing through it to look for the Pokémon who had been set loose from Oak's Lab by Red.

Route 1 first appeared in the first episode of the Pokémon anime, Pokémon - I Choose You!, where Ash Ketchum attempted to catch a Pidgey without any help from his starter, Pikachu. He encountered a Rattata, which ran away before it could be caught. Later, he and Pikachu were chased by a flock of Spearow to Viridian City after Ash had enraged a Spearow when he accidentally threw a rock at it, and it had made a call to its flock; they were later defeated by Pikachu's Thunder Shock.

Route 1 appeared in File 1 - Red where Red, who was on his way to Viridian City, encountered multiple Pokémon and managed to catch some of them. He battled against a Youngster and his Nidoran♀, and had tried to throw a PokéBall at it, unaware that he could not catch the Pokémon of other trainers. He and his Charmander battled against Blue and his Squirtle and was defeated by them. 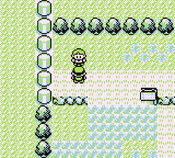 Talking to this NPC for the first time gives the player a Potion.

A tree containing a Bitter Berry

Kanto Route 1 in FireRed and LeafGreen

Taking to this person for the first time gives the player a Potion
Polski
Community content is available under CC-BY-SA unless otherwise noted.
Advertisement