Kahili is a character appearing in Sun and Moon. She is an Elite Four member of the Alola region.

Kahili has light bluish-white hair in the shaped like Swanna's wings with a cowlick. Her eyes are light blue and has a beauty mark near her left eye. Kahili wears a sky blue visor with a tiny orange patch. Her polo is a light cornflower grey-blue with sky blue stripes, matching her hat, with two blue dot patterns on her polo. Kahili's black golf club has the orange and yellow-colored handle, resembling a Toucannon's beak. In addition, Kahili wears a Z-Ring on her left wrist.

Kahili loves golf and is an expert in the sport. She also loves and uses Flying-type Pokémon. Kahili appears to be prim and having high standards, perhaps a surprising trait for someone so young in age.

Kahili undertook the Kahuna challenge a long time ago. She went to other regions to become a better trainer and a golfer. Hearing the Pokémon League would be established, Kahili flew back to Alola and became the Elite Four member, per Kukui's proposal. 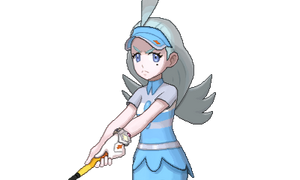 Kahili's VS sprite in Sun & Moon

Retrieved from "https://pokemon.fandom.com/wiki/Kahili?oldid=1278565"
Community content is available under CC-BY-SA unless otherwise noted.