Kabu is a Gym Leader and a user of Fire-type Pokémon.

Kabu is a middle-aged man with a muscular body, black eyes, and salt-and-pepper hair. He wears a red polo shirt with a fire symbol, a black and red undershirt with long sleeves, white shorts with red and black details, red socks, and shoes of the same colors. He has muscular calves. He also wears a Dynamax Band and has a white and red towel on around his neck as well a thumbless single glove on his right hand.

In the past, Kabu was a fiery hothead, always striving to achieve the best skills. But contrast to his goal, he kept losing, nearly causing him to give up. After having a battle with Leon, however, he restored his faith and decided to pursue harder on perfecting his skills once again.

His motto is to keep on training and learning, as long as he is alive. Kabu respects those who can best him, seeing them off alongside fellow Gym Leaders Milo and Nessa per old tradition.

Kabu is a Trainer originally from Hoenn who was invited to Galar. Despite his motto to win and be the best, he was always missing something and nearly gave up until he had a fantastic battle with Leon, and as such he continues to train to meet this goal.

Kabu is the third Gym Leader in the Galarian Gym Challenge and is considered the first major roadblock, as many Gym Challengers end up failing to defeat him and give up. 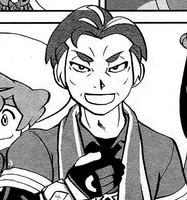