For the variant appearing in the games, see Jupiter.

Jupiter is a character appearing in Pokémon Adventures, who was a commander of Team Galactic.

Jupiter assaulted Maylene and Candice at Lake Acuity. She complimented the latter for her observations, and asked of Platinum and Maylene to stay for "her show".[1] Her enemies noted Jupiter was Team Galactic's commander, which she confirmed. She added like Saturn and Mars, she won't show mercy, and had Sableye and Gastrodon attack Riolu and Empoleon. Candice became impressed, and sent Abomasnow out, who went to attack her. As Abomasnow resisted the Shadow Sneak attack, Jupiter had Tangrowth use Natural Gift, with hit Abomasnow with a Fire attack. Jupiter looked at the sky, seeing an air shuttle, and explained the climax would soon begin. Platinum assumed the Galactic Bomb would be dispatched soon. Jupiter was surprised they knew about it, and explained there was only one Galactic Bomb, and she, like Saturn and Mars, did not know which lake would be devastated.[2]

Jupiter noticed that the air shuttle has arrived, and noted she'd have to capture the Knowledge Pokémon after the bomb would be dropped.[3] However, the bomb was not dropped, which made Mars suspect it was blown up on a different lake. However, she did see the Emotion Pokémon, Uxie, emerging from the lake. Jupiter explained to Candice, Maylene and Platinum that the three Lake Pokémon were connected by an invisible bond, and they would react if something happened to one of them. As Tangrowth went to capture Uxie, Candice and Maylene went to attack, but were easily defeated. Jupiter also saw a restraint, which emitted a net that captured Uxie. Platinum sent Rapidash to burn the net, but Tangrowth defeated it. Jupiter commented that she was here to see the plans carried out, and the air shuttle flew off with Uxie inside.[4]

Jupiter, after Uxie was taken away, commented that she didn't like snow. She preferred the places where her boss, Cyrus, grew up in: the city where the sun always shined.[5] Platinum went to Snowpoint Temple with the unconscious Maylene and Candice, who were carried by her Rapidash, and admitted that Jupiter and her Pokémon were too powerful for them.[6] Jupiter met up with Saturn and Mars at Veilstone City, and the trio went to Cyrus to report the success of the mission. Cyrus became pleased, and had the commanders assemble the grunts at the auditorium. They did so, and listened to Cyrus' speech about the incomplete world and the Red Chain, and clapped for him.[7] Jupiter reported an intruder in Veilstone City. Cyrus ignored that, and asked of his commanders to go to Spear Pillar at Mt. Coronet, who obeyed that command.[8]

The three commanders were at the Spear Pillar, and were pleased that the final phase of the plan would soon start. They saw Cyrus, and were surprised that he was badly wounded. Saturn simply glared them, and asked if there were any disturbances, to which the commanders denied. Cyrus went to conduct the plan, while the commanders defended him. Jupiter sensed something behind her, and had Gastrodon attack, but missed. The three commanders soon noticed Roark, Gardenia and Fantina, and belittled them, for three people were not powerful enough to stand up to Team Galactic.[9] Jupiter, Saturn and Mars faced the Gym Leaders. As more Gym Leaders started arriving, Jupiter wondered from where they were coming from, since their grunts, which have been posted at Mt. Coronet, haven't reported anything. Much to their surprise, they saw that Byron and the Underground Man below them, who dug a tunnel for the Gym Leaders to bypass their security. The three commanders smiled, as they decided to have each one of them battle two Gym Leaders at a time. Jupiter faced Maylene and Candice, and sent her Tangrowth, Gastrodon and Sableye to battle them.[10]

Jupiter faced Maylene and Candice, and had her Tangrowth use Natural Gift. However, Maylene's Riolu used Aura Sphere and Candice's Abomasnow fired Ice Shard, which defeated Jupiter and Tangrowth. Later, Jupiter noticed Sird approaching the Spear Pillar, who asked why was she late. Jupiter noticed that Sird's leg was still damaged, to which Sird added that her leg could not be healed from the Ice-type attack. To help her, Sird gave her a leg warmer, and Sird thanked her.[11] Sird taunted Jupiter, who, despite her brave battle against the Gym Leaders, had failed. In fact, her calm nature made her more susceptible to the effects of the space and time distrotions. Jupiter, however, introduced Sird to Mars and Saturn, as the Team Rocket spy, while Sird explained her mission.[12]

With the battle raging on, Saturn, Mars and Jupiter fled from the Spear Pillar.[13]

Mars, Jupiter and Charon were hiding in Eterna City. They observed Charon's fight, and noted with Cyrus gone, he was just trying to collect Legendary and Mythical Pokémon, and nobody could stop him. Mars refused to fight Charon, while Saturn asked Jupiter what to do. The latter looked at the hole, and stated that their boss, Cyrus, lied beyond that hole. Saturn used his machine to grab Mars and Jupiter, and flew off with the two through the hole.[14]

Saturn, Mars and Jupiter went to the Distortion World. They observed Volkner and Flint fighting Giratina. Mars wanted to team up with Volkner, thinking she'd be a match, for they both had an Electivire, but Saturn reminded her they didn't come to play. Suddenly, Charon arrived, and pretended to be here to save Cyrus. Since he was being chased, Charon flew away, leaving the Team Galactic commanders to confront Cheryl, Marley and Mira. Saturn and Mars didn't want to fight, but Jupiter leapt in, as she believed Charon that he was going to save Cyrus. Thus, Jupiter and Tangrowth faced Marley and Arcanine.[15] Tangrowth used Natural Gift, which electrocuted Arcanine. Jupiter swapped Tangrowth's berry and had it repeat its attack, which soaked Arcanine. Marley was in disbelief that the same move had different types, but Platinum gave her the Vs. Recorder. Knowing that the type of the move changed depending on the berry, Marley's Arcanine evaded the attack of the Rock-type Natural Gift, to which Jupiter sensed that Marley was predicting her moves.[16]

Cyrus emerged from the Distortion World, through the hole, and confronted Charon. Cyrus announced that Team Galactic would be disbanded. As he went away, Jupiter stopped Cyrus, for they dedicated their lives to Team Galactic, and had nothing do without it. She called upon Mars and Saturn, who were pondering thoughts. Cyrus had them taken on Magnezone. Before he went away, Cyrus turned to Diamond, Pearl and Platinum, and applauded them for being strong warriors with noble hearts, and thanked them.[17] 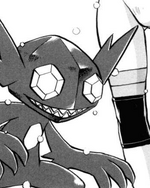 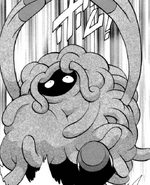 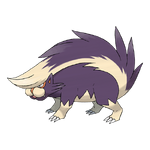