For the variant appearing in the games, see Juan.

Juan is a character appearing in Pokémon the Series: Ruby and Sapphire, who is the Gym Leader of Sootopolis City in the Hoenn region.

This section, or a part of it, has been transcluded from Juan; any changes involving it should be made there instead. /

Juan is a man with dark eyes, a small, trimmed moustache and black hair with two white locks standing out in the front and one on his right side of the head. Juan wears a skin tight black suit, a regal blue mantle, a white scarf with a blue gem etched into it. He also wears purple cargo shorts and a pair of white penny loafers.

Juan's manners and character make him an educated gentleman. Juan specializes in Water-type Pokémon and explains to Ash and his friends that two reasons he chose to specialize in water-types was because of their beautiful appearances and, much to the confusion Ash and his friends, their weakness to electric-type attacks. Juan trained his Pokémon to wait for an attack and then stand guard. He claims such tactics required a strong bond with Pokémon, and such tactics were used in his Contests, which made them interesting.

The name Juan comes from"water," as the "Jua" in "Juan" and the "wa" in "water" are pronounced the same. It is also likely that his name is a reference to legendary womanizer Don Juan, as he fits the archetype of the dashing romantic. His many female fans support this theory.

Juan was a Pokémon Coordinator, who made his way to the Grand Festival and won the Ribbon Cup with his Milotic.[1]

Juan was the Gym Leader of Sootopolis City. The city was celebrating him and his Pokémon, who opened a building dedicated to art. Juan bowed in honor, but Team Rocket appeared to try and steal his Pokémon. Juan initially thought they were also artists, but hearing Team Rocket was a bunch of thieves, he claimed it was a big waste of them. Unfortunately for Team Rocket, Juan's Pokémon were well-trained to defend themselves as Juan's Milotic easily freed the other Pokémon and sent Team Rocket blasting off in defeat again. With Team Rocket gone, Ash requested a Gym Battle with Juan for his final badge for the Hoenn Pokémon League, the Rain Badge. Ash requested Juan to a battle, who accepted and took the heroes onto his boat to his Gym.

While on the boat, the heroes were talking to Juan, who revealed he was a Coordinator that won the Grand Festival a long time ago. He admitted he trained his Pokémon to defend first, then attack head on. Ash decided to show some of his ideals in the battle, which made Juan glad. Upon entering the Gym, Juan requested to challenge Ash to a Double Battle, then a 3-on-3 battle, so he could test Ash in various Pokémon battle scenarios, which can happen in the Hoenn League. For the Double Battle, Juan used his Sealeo and Seaking, while Ash choose his Pikachu and Snorunt. Seaking managed to deflect back the Thunderbolt at Pikachu with Horn Drill, while Juan was not amused by that simple attack. While Sealeo launched Blizzard, Snorunt retaliated with Icy Wind, which created an icy boulder. The boulder was shattered by Sealeo and Seaking, though Pikachu and Snorunt mounted an attack. However, Seaking defeated Snorunt with Hyper Beam, so Ash sent Corphish in the battle.

Juan commented the icy boulder was a creative idea, but a risky one. Corphish managed to stop Seaking's Horn Attack, but was knocked away by its Horn Drill. However, Pikachu defeated Seaking with Iron Tail, while Sealeo launched Ice Balls on the duo. Fortunately, Pikachu destroyed the biggest Ice Ball with Thunder, while Corphish defeated it with Crabhammer, which surprised Juan. With the Double Battle over, Juan, who was interested in such creative tactics, moved onto the 3-on-3 battle with Ash. Ash sent his Grovyle to face Juan's Luvdisc, who quickly put Ash into a corner by using Sweet Kiss on Grovyle, confusing it.[1]

As Grovyle is now in a confused state, it is easily defeated by Luvdisc's Water Gun. Juan stated Ash would have a hard time if his strategy got disturbed by these little surprises. Ash was forced to send Corphish in. Luvdisc managed to evade Corphish's attacks and dive into the water. Corphish used Crabhammer on the water, forcing Luvdisc to emerge. However, this started to rain and boosted Luvdisc's speed, since its Swift Swim was activated. Corphish used Bubble Beam on the water, stopping the rain, and defeated Luvdisc with Crabhammer. Juan then sent out his Whiscash, which easily negated Corphish's Bubble Beam with Surf, then defeated Corphish with a Rock Smash. Ash sent Swellow, on whom Whiscash used Tickle and Hyper Beam. Juan was surprised Swellow endured the attack and used Aerial Ace to blow Whiscash away and defeat it.

Juan was impressed by Ash's skill and sent "his dear friend", Milotic, out. Milotic managed to resist Swellow's Aerial Ace and placed its tail in the water, blowing Swellow away with Twister. Ash sent Pikachu, even if Juan told him any electric attack would be blocked. Pikachu managed to electrocute Milotic with Thunder. Milotic used Recover, as Juan noted he wanted to keep Milotic's pristine appearance during the Contest battles, hence why he taught it Recover move. Milotic managed to blow away Pikachu to the ceiling, just like it did to Swellow, though Pikachu's Thunder stopped the move. Juan was amazed how much power Pikachu had, even if it was exhausted. Pikachu evaded Hydro Pump attack and electrocuted its enemy with Thunderbolt, yet Milotic used Recover once more.

Fortunately, Ash had Pikachu run towards Milotic, avoiding its Hydro Pump and Iron Tail attacks. Once close enough to Milotic, Pikachu knocked it underwater and then electrocuted Milotic with Thunder. Since water conducts electricity, Milotic was thoroughly shocked and defeated. With Milotic gone, Juan lost the Gym Battle, though he was very impressed by how Ash was able to clinch victory from the jaws of defeat. He awarded Ash the Rain Badge, qualifying him for the Hoenn Pokémon League in Ever Grande City. He also told May that there is another Pokémon Contest coming up in Pacifidlog Town where she could get her fifth and final ribbon as well. Before they left, Juan counted on Ash and May to do their best.[2]

Before arriving to Slateport City for May's Grand Festival, she and Ash remembered their past adventures so far. Ash recalled Juan, who opened an art building in Sootopolis City with a performance by his Pokémon. Next, Juan faced Ash in the Gym match, which was composed of a Double Battle and some Single Battles. Ash managed to defeat Juan, who gave Ash the Rain Badge.[3]

While seeing Fantina, Team Rocket remembered Juan, who also was a Top Coordinator that became a Gym Leader.[4] 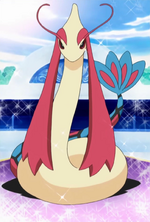 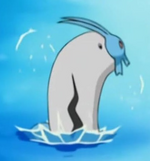 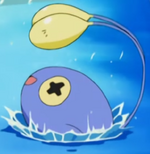 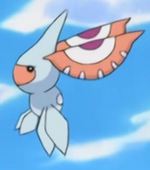