Jolteon (Japanese: サンダース Sandaasu) is a Electric-type Pokémon introduced in Generation I.

Jolteon is cheetah-like in appearance. It is covered in spiny yellow fur with the exception of the white "collar" around its neck, which stands on end, as if just being shocked. Its eyes are purple, and Jolteon has no visible tail. Its fur has an electrical appearance and shows off its courage and boldness.

Jolteon have the ability Volt Absorb. This allows Jolteon to absorb any Electric-type move and heal itself. Jolteon is able to gather negative ions from the atmosphere, using the resulting electricity to create lightning bolts of up to 10,000 volts. Its individual cells also create small electrical charges on their own, which combined with the static electricity caused by its body can result in powerful electric-type attacks. It's very sensitive which causes it to constantly charge as it quickly changes moods. It can also make lightning and cause small thunderstorms. When threatened, it can fire spikes from its body.

Jolteon is one of the eight evolutions of Eevee. Its evolution is caused by the radiation from a Thunder Stone. 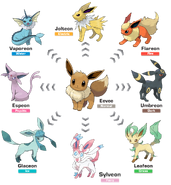 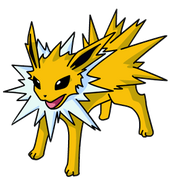 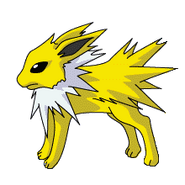 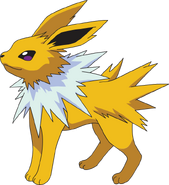 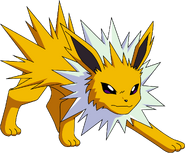 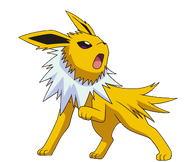 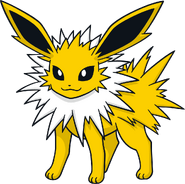 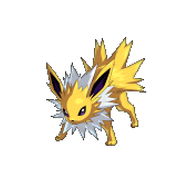 Its English name comes from jolt and eon, much like Flareon and Vaporeon. Also, its Japanese name, Saandazu, which is read Thunders, is a pun about its electrical nature.