For the variant appearing in the games, see Johanna.

Johanna and her Glameow performed in a Super Contest, which was recorded on a video.[1]

When Diamond had won the Grand Prix, he informed his mother, who became very pleased. She wished him luck on his journey, which he received as a reward.[2]

When Diamond saw a photo of Byron and Roark, he thought of himself and his mother, Johanna, as family he needed to protect from Team Galactic.[3] Diamond eventually informed his mother that he'd come back to Twinleaf Town. His mother bought him a coat, and went to Lake Verity to harvest some berries for the party.[2] However, she was threatened by Mars and her Zubat, who attempted to have Diamond drop his Poké Balls.[4] When Mars was distracted, Johanna used her basket to spray some liquid on Zubat. Zubat became distracted, which let Johanna run away. She ran off to Sebastian and Roseanne, who took her in the carriage away.[5]

Johanna, Sebastian and Roseanne went to Diamond's house. The trio was safe, but wondered what happened to Diamond. Johanna noticed that Diamond took the shoes and coat she had bought, to which Sebastian and Roseanne confirmed that he had visited the house. Johanna was pleased, for she placed a phone inside the coat, and went to call Diamond. Diamond picked up the phone, which made the trio happy that he was alive and well. Diamond apologized to his mother for risking his life, to which Johanna simply asked him to come home, where he'd have the berry grill. Diamond refused, and admitted while he was with Mesprit, whom he was trying to protect, he was stuck in Team Galactic's air shuttle, which shocked the trio.[6] His mother desired Diamond to return back to her, since it was too foolish to take on the enemy. Diamond, however, reminded her about the Taurina Omega show he loved to watch. He reminded about the villains, whose aim was to take control of the world, which, were, in fact, real, in form of Cyrus and Team Galactic. Diamond swore to stop them, and admitted this was how he felt, to which his mother understood his emotions.[7]

The trio encountered Pearl at Route 212. Showing Diamond's Kit and Tru, Pearl assumed that Diamond has gone missing. Sebastian and Roseanne explained that he wasn't missing, but his mother explained that Diamond was in the air shuttle, which went to Veilstone City, much to Pearl's shock.[8] His mother explained to Pearl that Diamond went in the air shuttle to Veilstone City, and understood his feelings to stop Team Galactic. She thanked Pearl and Crasher Wake for believing that his son was alive and well, while she admitted she didn't expect such a big event to involve her son.[7]

Johanna and Glameow were practicing their dancing, after the conflict with Team Galactic was over.[9]

Johanna was baking berries, and went out of her kitchen. However, she didn't see *him*, and looking at an advertisement, she noted it was the day of the performance, for he has been practicing all morning. She thought how wonderful it'd be if he would win the championship, but noted even if he didn't, it'd be okay, for he and his friend would follow their dreams in Jubilife City.[10] 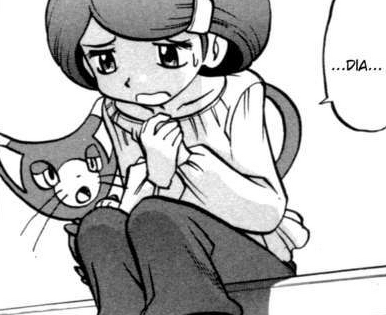 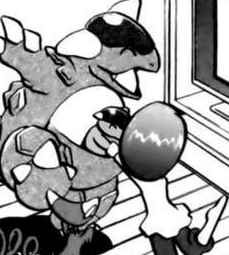 Retrieved from "https://pokemon.fandom.com/wiki/Johanna_(Adventures)?oldid=1146890"
Community content is available under CC-BY-SA unless otherwise noted.