Johanna is a character first appearing in Diamond and Pearl. She is the mother of Lucas/Dawn, and lives in Twinleaf Town.

Since Johanna only appears as an overworld sprite game-wise, what she looks like can be hard to discern. From what can be gleaned from her sprite, Johanna has shiny blue hair cut into a bob, fair skin, and blue eyes. She wears a white long-sleeved shirt, blue pants, a pink apron, and red shoes. Overall, she greatly resembles her child.

At the start of the player character's adventure, Johanna warns them not to go into the tall grass, since they don't have a Pokémon of their own yet. After the player character comes back home from an incident with some Wild Pokémon, Johanna gives them some Running Shoes and wishes them good luck on their journey. When she eventually gets bored, Johanna decides to take a vacation. She travels to Hearthome City, where she meets up with the player character by chance after they enter the Contest Hall and help Keira with her unruly Buneary. After talking about how surprised she is, Johanna gives the player character an outfit (either a tuxedo or a dress, depending on their gender) so they can participate in Contests before departing. Later, still wanting to itch her urge to travel, Johanna travels to the Battle Frontier (specifically, the Battle Hall's lobby) and shows her support for her child by cheering them on. From there, the player character is unable to meet her in any new places, unless if they're playing Pokémon Platinum.

Johanna in Pokémon the Series (anime) 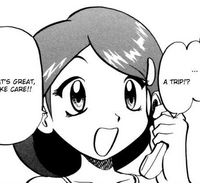 Johanna has a Kangaskhan that she nicknamed "Jumpy". If the player character is lucky, they might find her entering contests with it.