The School of Hard Knocks

Joe is a character appearing in Pokémon the Series: The Beginning, who was a student at Pokémon Tech. He wears a Pokémon Tech blue uniform suit with a school crest, under a light yellow long sleeved shirt.

He was first seen running on a treadmill trying to answer questions about Pidgey. When Ash defended him, he revealed that the school he went to wasn't far from where they were standing. He says that he sometimes pretends not to know the answers because his classmates will make the questions much harder for him to answer. He carries a picture of Giselle, his classmate stating that even though he doesn't like the way she treats him, he likes the way she looks. Joe had a battle with Misty, and even though Joe's Weepinbell had the type Advantage, Misty's Starmie won the battle. After watching a battle between Giselle's Cubone and Ash's Pikachu, Joe decided to go back home and start training again, while also becoming friends with Giselle in the process. 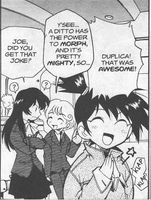 Joe in The Electric Tale of Pikachu (manga)