Omega Alpha Adventure 6
This Slowbro is a water/psychic-type Pokémon owned by Jinga.

Jinga and Slowbro flew on Flygon, along with Toma-Toma and Renza. They encountered Ruby leaving the Sky Pillar and intimidated him.

Jinga Mega Evolved his Slowbro and had it attack Ruby, along with Renza's Sableye. Mega Slowbro used Yawn, a move which Ruby's Mega Latios resisted, but was hit by Mega Slowbro's Focus Blast attack. The Pokémon stood in mid-air, since Ruby's Mega Latios spread out tiny vapors, allowing the Pokémon to walk on air. Ruby asked the Draconids if they are Zinnia's friends, since Zinnia claimed Devon Corporation as her enemy and the Draconids stopped their attacks. 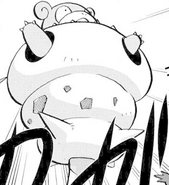 As Mega Slowbro
Add a photo to this gallery
Retrieved from "https://pokemon.fandom.com/wiki/Jinga%27s_Slowbro?oldid=1413457"
Community content is available under CC-BY-SA unless otherwise noted.