This Woobat is a Psychic/Flying-type Pokémon owned by Jessie that was captured off screen.

It was revealed that Jessie caught it in a cave swarming with Woobat as per Giovanni's order to capture new Pokémon only from the Unova region so they won't attract too much attention. It defeated Ash's Pidove, but fell to Ash's Oshawott's Water Gun. It reappeared in Dreams by the Yard Full! where Jessie sends it out again to help them escape.

In Scare at the Litwick Mansion!, where it and James' Yamask team up with Ash's Oshawott and Cilan's Pansage to defeat the four evil Litwik and their Lampent leader. In The Dragon Master's Path!, it teamed up with James' Yamask to take down Emmy's Druddigon and Iris' Axew after they escaped. Jessie was impressed by Druddigon's Draco Meteor (even though it knocked out Yamask), and attacked it with Gust, but it fell to Ash's Pikachu's Electro Ball.

In Crisis at Chargestone Cave!, Woobat is used to battle Ash's Pikachu, Bianca's Minccino, and Cilan's Dwebble, alongside Yamask. After they unleash their Gust/Night Shade combo, Pikachu and Minccino hit Yamask with Thunderbolt and Swift, while Woobat continued to use Gust on Dwebble, who is blown back. Dwebble tries to fight against the wind, and evolves into a Crustle. With its newfound power, it intercepts Woobat's strongest attack, Air Slash with an even stronger Rock Wrecker, which forces them to retreat.

In A Restoration Confrontation! Part 1, Woobat battles against a Tirtouga that has escaped from their helicopter. In the second part, it had to face off against Cilan's Pansage and Ash's Pikachu in order to steal the newly evolved Carracosta and steal the Pokémon in the time gate. Their plans are foiled, and they are forced to leave.

Woobat was used frequently in Team Rocket's Unova operation in the original Black & White series as well as Rival Destinies, as it was Jessie's only Pokémon. As a result, it became very strong from battles against Ash and his friends.

After their defeat in the Rival Destinies season finale, where they retreat back to Kanto, Jessie caught a Frillish, while James caught an Amoonguss. Unlike Yamask, who has been completely replaced by Amoonguss, Woobat was still used, even after Jessie captured Frillish, and its main position on her team was quickly restored, as Frillish was literally, used 3 times, 2 of which were before Woobat Adventure in Unova debut.

It made its Adventures in Unova debut in The Light of Floccesy Ranch!, where it battled Ellie's Ampharos in an attempt to steal her Mareep. It damaged Ampharos heavily with Air Slash, and then put them on the ropes with Gust. Ampharos sent out a distress signal, which helped Ellie, Ash, Cilan, and Iris to find them. Ash sends out Snivy to even the score, and stops the Gust assault with an attack from behind with Leaf Blade. After eliminating Iris' Dragonite with Air Slash and Amoonguss' Hidden Power, Woobat focuses its gust on Snivy. Ampharos finally musters all of his strength, and blasts Team Rocket off by defeating Woobat and Amoonguss with ThunderPunch.

It was also used to fight off Team Plasma's controlled Pokémon in "What Lies Beyond Truth and Ideals!"

In the series finale for Pokémon Black and White, Woobat was given away to Giovanni at Team Rocket Headquarters.

Jessie sending out Woobat in the Audino episode 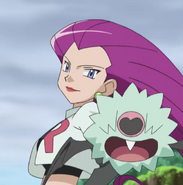