Pickup (Not yet activated)

A Festival Trade! A Festival Farewell? (71 episode(s) as a Pumpkaboo)

Name
ムサシのパンプジン
(Musashi's Panpujin)
Voice actor(s)
Miyako Itō
Notes
Depending on the context, "の" may be the possessive, unless it is used in the name of a character, Pokémon, or fossil.

Name
?
(?)
Voice actor(s)
Megumi Sato
Notes
Depending on the context, "の" may be the possessive, unless it is used in the name of a character, Pokémon, or fossil.

The Bamboozling Forest! (location: Kalos Route 5)
This Gourgeist is a Ghost/Grass-type Pokémon owned by Jessie from Team Rocket and the only Pokémon she obtained in the Kalos region.

Gourgeist has often proven very much her trainer's Pokémon, being very energetic and temperamental. She has mimicked Jessie's hammy and moody qualities on several occasions, and enjoys the limelight of Showcase tournaments as much as her. Like many Team Rocket Pokémon, her loyalty and closeness to Jessie has been displayed several times. She was very hurt when Jessie suggested trading her, though was quickly overjoyed when she changed her mind. She also had a recurring habit of flashing the lights in her stomach.

Being with Team Rocket, Gourgeist has endured a lot of damage in battle. Her Leech Seed and Seed Bomb attacks have sometimes proven rather dangerous, however. Her attacks have also been rather pivotal in Showcases.

Gourgeist, as a Pumpkaboo appeared in The Bamboozling Forest! while Team Rocket was lost where she appeared out of the ground after Jessie tripped over her horns. Jessie immediately threw a Poké Ball at her and caught her easily in one go.

Pumpkaboo was used to help Jessie compete in a Pokémon Showcase located in Coumarine City. But lost was she got the least amount of votes from the audience.

Pumpkaboo was later used to compete in the Pokémon Sky Relay tournament. But despite managing to win the first lap, she was disqualified, along with her team when Meowth's Pelipper machine was exposed.

Sometime later during the Gourgeist Festival, Jessie traded her Pumpkaboo in exchange for Count Pumpka's Mawile in hopes for Mega-Evolving her and for Prince Pumpkaboo's happiness. However, when her Pumpkaboo evolved into Gourgeist as a result of her trade and an intimidated Prince Pumpkaboo lost full interest in her, Jessie, outraged at this rejection, changed her mind and traded her back. Despite her evolved form, Gourgeist didn't prove much more effective in battle against Ash's team, though Jessie was nevertheless still overjoyed to have her loyal Pokémon back.

Gourgeist later participated in several other Showcases with Jessie, proving much more effective than before. She helped Jessie reach third place in the Anistar City performance round, and later performed and won the Couriway Town performance round, helping Jessie win her first Princess Key. She would end up helping Jessie get to the top four of the Kalos Master Class alongside Meowth. 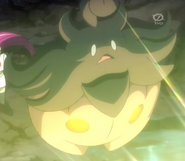 Gourgeist, as a Pumpkaboo being controlled by an evil, rogue Malamar.

Pumpkaboo, along with Jessie, James, Meowth, and Wobbuffet, is terrified about Inkay's evolution line