Jellicent are enormous aquatic jellyfish-like Pokémon that share some traits with octopuses. They possess a regal appearance. Their bodies are mostly composed of sea water. Like its pre-evolution, its appearance varies depending on its gender. Male Jellicent are cyan blue in colour with a thick light blue mustache-like membrane curing around its face; it has round blue eyes with red pupils, and its three lower tentacles are lined with diamond-shaped light blue markings. Female Jellicent are bright pink in colour, with a frilly light pink membrane curling around its body, red eyes with blue pupils and two long black eyelashes, and a red lip-like mouth; its lower tentacles are bordered by light pink frills. Jellicent have large, round, bulbous heads with small crown-like features on top.

Male Jellicent have blue bodies, wavy tentacles, and a mustache. Females have pink bodies, fluffy tentales, and a fluffy crest.

According to legends, Jellicent are territorial, they seem to capture, and consume anything that enters their territories (including ships), by dragging them down into the depths of the ocean.

Jellicent absorb sea water and propel themselves through the water by rapidly expelling it.

Jellicent is based on a jellyfish. It also slightly resembles an octopus.

Jellicent may be a combination of the words "jellyfish" and "descent" (as it is known to drag ships down to their doom beneath the sea). It might also a combination of jellyfish and translucent. It can also be taken from "magnificent", as it looks aristocratic. 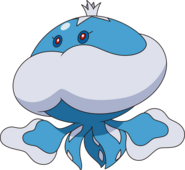 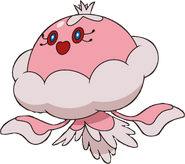 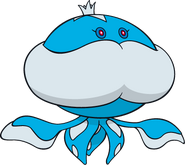 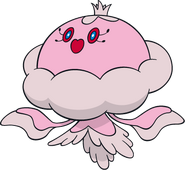