The Fourth Round Rumble

Jeanette Fisher is a character appearing in Pokémon the Series: The Beginning. She was Ash's opponent in the fourth round of the Indigo Plateau Conference.

Coming from Crimson City, Jeanette came to the League with her cheering squad. She used her Beedrill and Scyther against Ash's Bulbasaur, who managed to beat them both. However, when she sent out Bellsprout, both Bulbasaur and Pikachu were defeated due to its unusual moves. However, Ash's Muk was not hit by any of those moves and defeated Bellsprout, so Jeanette walked out of the stadium, defeated.

Jeanette appeared in the opening scene of Adventures on the Orange Islands season, but she did not appear in any of the episodes. 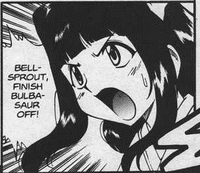 Jeanette Fisher in The Electric Tale of Pikachu (manga) 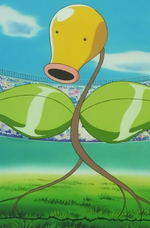 Jeanette explains to Ash how Bellsprout can't be affected by Pikachu's electric attacks.

Jeanette carries Bellsprout after it is defeated by Ash's Muk.
Community content is available under CC-BY-SA unless otherwise noted.
Advertisement