For the variant appearing in the games, see Jasmine.

Jasmine in Pokémon the Series: Diamond and Pearl series, and in Gold and Silver series.

Fight For The Light!

Jasmine is a character appearing in the anime series, who is the Gym Leader of Olivine City in the Johto region.

Jasmine is a teenage girl with brown eyes. She has long brown hair, tied in two pigtails with two orange hairpins.

She wears a teal dress, with an orange bow and a white jacket, as well as white sandals, which have two teal decorations.

Jasmine wants her apprentice to listen to her Pokémon with her ears and her heart. Jasmine takes care of the lighthouse's Ampharos and refused to have any battles with any trainer until Ampharos got healed. Jasmine also wishes to experience new things in life, hence why she wanted to become a Coordinator. While battling, Jasmine usually switches between offensive and defensive strategies.

The name Jasmine comes from "jasmine" (a type of plant) and "mine" (as in to mine stones or minerals) or "mineral".

Her Japanese name, Mikan, originates from 金 (kane, metal or gold) and "mechanical". Following the plant-based naming of most Gym Leaders, it may also include 蜜柑 (mikan, a word used to refer to citrus fruits).

She first appeared when she stopped a battle between Ash and her apprentice Janina. She scolded Janina for using waterproof wax on her Onix and sent her away. She then declined Ash'd challenge for a Gym Battle, as Sparkle, the Ampharos at the Olivine City Lighthouse, was sick and she had to take care of it. The heroes came to the old lighthouse, where they saw the sick Ampharos. Ash asked Jasmine for a Gym Battle, but Jasmine pointed out she could not battle as long as Sparkle was sick. Her grandfather, Myron, knew Sparkle could be healed by some medicine acquired from the pharmacy in Cianwood City; Jasmine wanted Janina to get the medicine, but she was furious after Janina used the wax. After seeing her apprentice battle with her own strength, Jasmine let Janina be her apprentice again, saying she was never expelled in the first place. She asked of Janina to acquire the medicine for Sparkle, which Janina accepted. The following day, the heroes departed with Janina and bid Jasmine farewell.[1]

While flying in an airplane to Olivine City, the heroes saw Jasmine and Janina waving hands to them at the lighthouse.[2]

The following day, Jasmine was showing off her bravery by jumping onto her Steelix's head from a very high cliff, who had defeated Team Rocket after they tried to steal Ash's Pikachu. During the Gym Battle back at the Olivine City Gym, Jasmine sent Magnemite, who tried to use Thunder Wave. Pikachu evaded and managed to defeat Magnemite with Thunderbolt and Quick Attack. Instead, Jasmine sent her Steelix out, who quickly defeated Pikachu with Iron Tail. For his second Pokémon, Ash sent Cyndaquil out, who evaded Steelix's attacks, and went into the holes dug out by Steelix's Dig, and launched Flamethrower on Steelix. Steelix bashed the ground and closed the holes, then hit Cyndaquil with Iron Tail. Cyndaquil stood up, though it was badly wounded. It launched Flamethrower, and despite Steelix using Sandstorm to protect itself, Steelix eventually fainted. Jasmine was impressed and gave Ash the Mineral Badge and advised the heroes to make a stop at Ecruteak City before going to Mahogany Town. The heroes bid farewell and while Brock tried to flirt with Jasmine, he was pulled away by Misty, who reminded him they already said their goodbyes.[3]

When Team Rocket stole Ash's badges, Ash was searching for the lost badges. He also remembered his battles with the Johto Gym Leaders, including Jasmine and her Steelix, as Ash and his Pokémon won those badges through hard effort.[4]

Jasmine came to Sunyshore City, where she met up with Ash and Brock, the latter trying to flirt with her and getting hit by Croagunk's Poison Jab. After being introduced to Dawn, Jasmine admitted she wanted to get new experiences, hence why she wanted to try out some Pokémon Contests. She challenged Flint of the Elite Four, by sending Steelix against his Infernape, but lost the battle. Jasmine admitted she learned a lot about the battle and was told Flint didn't attack from the start, since he wanted to study his opponent's moves first. Jasmine also noticed Dawn being concerned, who told her she does not know what she'd do after she supports Ash in the Sinnoh League. Jasmine advised her to carve her own path and decide for herself. Later on, Jasmine bid the heroes farewell, who sailed off to Lily of the Valley Island, where the Sinnoh League was being held. Jasmine, however, went back to the Gym, as she had learned much and grew stronger.[5] 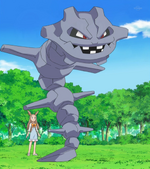 Jasmine with her Pokégear

Jasmine on her Steelix