Pokémon Wiki
Register
Don't have an account?
Sign In
in: Pokémon manga characters, Female characters, Characters from Johto,
and 4 more

For the variant appearing in the games, see Jasmine.

Jasmine's appearance in HeartGold & SoulSilver arc, and in Crystal arc.


(Mikan)
Jasmine
Jasmine is a character appearing in Pokémon Adventures, who is the Gym Leader of Olivine City in the Johto region.

Jasmine is a teenage girl with brown eyes. She has long brown hair, tied in two pigtails with two orange hairpins.

Jasmine wears a white sleeveless dress, with a large white ribbon, and ankle-strap sandals. She does not have any sclera in her eyes.

Her appearance is identical to Gold & Silver arc. However, she has sclera in her eyes.

She wears a teal dress, with an orange bow and a white jacket, as well as white sandals, which have two teal decorations.

Jasmine has a kindhearted personality, and cannot bear to see Pokémon come to harm. She is also very shy and wary of others' opinion, as shown when she covers her Steelix with a coat of rock, as she believed that people would be shocked by the existence of a Steel-type Pokémon.

The name Jasmine comes from "jasmine" (a type of plant) and "mine" (as in to mine stones or minerals) or "mineral".

Her Japanese name, Mikan, originates from 金 (kane, metal or gold) and "mechanical". Following the plant-based naming of most Gym Leaders, it may also include 蜜柑 (mikan, a word used to refer to citrus fruits).

Jasmine received a call from her grandfather at the Day Care, who informed her that her Pokémon had hatched. She expressed her excitement over the news, telling her grandfather that she would bring him some tangerines when she would arrive. While at Ecruteak City, Jasmine wondered what sort of Pokémon it will hatch into, but a sudden earthquake rippled through the area, as the ground beneath Jasmine collapsed. She then fell into the dark abyss alongside her Magneton.[1] Due to the news of the earthquake, Jasmine's grandmother sent exhausted Gold to look for their granddaughter.[2]

Later, Jasmine lapsed from unconsciousness in the Tin Tower, caught underneath a slab of rubble. She stated that she had gone up there to escape from the constant tremors, telling her Amphy to send out a signal to alert the outside world of her presence. As Gold made his way to the city, he saw Jasmine's Amphy lighting up a beacon within the Tin Tower. As Jasmine straggled within the structurally unsound building, Silver appeared before her. She asked who he was, as Silver freed Jasmine from the rubble. Suddenly, Gold entered the room where the light is emanating from, and noticed Silver carrying the unconscious Jasmine. The two eyed each other off, as Silver handed Jasmine to him, telling him to leave the building immediately. However, before Gold could make away with her, the exit began to cave in. In a split second decision, Amphy took Jasmine on his back, prior to Gold hurling them through the crumbling exit.[3]

After the crisis was absolved, Jasmine awakened at the temporary refuge camp. She asked the doctors where she was, to which they informed her of the situation. Jasmine asked of the person who rescued her from the collapsing pagoda, but the doctors told her that her Amphy was the one who rescued her from the ruins. She wondered whether her ordeal was just a dream, but reassured herself that she definitely remembered two more people within the pagoda. Jasmine asked of the situation regarding the pagoda, to which one of them informed her that they would have to wait until morning to find out the extent of the damage.[4]

Professor Elm explained to Gold he researched the metal particles Gold's Aibo had when it scratched Masked Man's mask. Elm found out the mask was made of the material the Gym Badges are made of, including Jasmine's Mineral Badge.[5]

Jasmine was working with others on reconstruction of Ecruteak City. Yellow and Wilton arrived to help Jasmine in the task. Jasmine accepted that, while Wilton wondered where Ectureak City's Gym Leader was. Jasmine replied that he had to take care of certain stuff. Either way, she explained they were reconstructing the Tin Tower, where Ho-Oh lived once. Suddenly, a fire bursted in the Burned Tower, so Yellow attached her rod to Omny, who fired Hydro Pump to douse the fire. However, Yellow was soon pulled through a rock, where she saw the Legendary Beasts. Jasmine and Wilton were searching for her and were surprised that Entei, Suicune and Raikou came out of the rock. Yellow came out, too, so Jasmine recalled the Burned Tower was the place where Ho-Oh arrived to rescue the three Pokémon that were trapped in the fire. Yellow realized Entei, Suicune and Raikou were those three and that Ho-Oh's flames revived all three of them.[6] Jasmine gave Yellow a note that showed the location where her grandparents were, thinking it was a place she and her cousin, Wilton, would be interested in going to.[7]

Jasmine came to the Indigo Plateau, where she and Ampharos participated in the Gym Leaders' tournament. There, she pulled out an apricot and was chosen to battle against Brock.[8] Later, during the Gym Leader Tournament, Jasmine fought against Brock. Before the battle, Jasmine sent all her Pokémon, to decide which one she would choose and she sent Amphy. Since her Amphy was getting hit by Brock's Kabutops' Ancient Power, Jasmine sent her Steelix, who was disguised as an Onix, for she believed that people would dislike the idea of a Steel-type Pokémon. Brock sent his Onix as well, who tried to bind Jasmine's Onix. However, the rocks cracked, as Steelix' steel was much more powerful material. Thus, Steelix managed to use Crunch to defeat Onix. Steelix' rocks fell off, revealing its true nature, which surprised Brock. Jasmine admitted it was a Metal Snake Pokémon, whose rocks become solid steel after a hundred years. Brock asked Jasmine why she didn't reveal Steelix and was told it would "just show off" and would be an unfair advantage against her opponent.[9]

Since Blaine was absent, Clair's battle was postponed and Jasmine watched Pryce battling Erika.[10] Due to Team Rocket having infiltrated into the Indigo Plateau, Jasmine battled the grunts. She and the Gym Leaders went into the train, which locked them all in and rode away.[11] While inside the train, Jasmine fought against Team Rocket forces.[12]

In the end, Jasmine returned to her Gym, where she was challenged by other trainers, who wanted to obtain her badge to enter the Pokémon League.[13]

Jasmine was in Hearthome City with Fantina, preparing herself for the Super Contest.[14] In fact, Jasmine left with her Amphy to Sinnoh region, to perfect herself Pokémon Contests.[15]

Before Silver left Morty at Ecruteak City Gym, he returned the Gym Badges he stole from Gym Leaders, including Jasmine's Mineral Badge.[16] 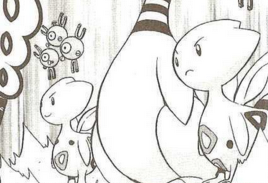 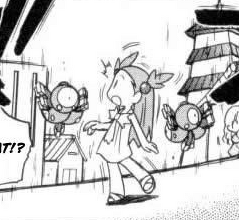 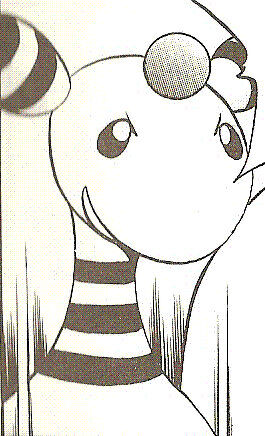 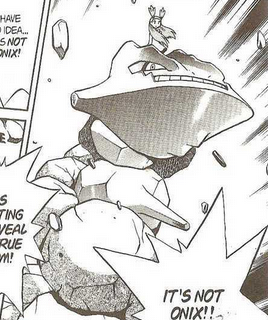 Jasmine shocked by the tremors in Ecruteak City.

An unconscious Jasmine rescued by Silver. 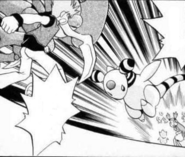 Jasmine and Brock battle at the Gym Leader tournament.