Janine is Koga's daughter and is the Gym Leader who succeeded/replaced him in Gold, Silver, Crystal and HeartGold and SoulSilver. She both runs the Fuchsia City Gym, and as well as specializing in using Poison-type Pokémon just as her father did in the Kanto based games. She will award the player the Soul Badge and TM84, TM06 in Gen. II, if you defeat her.

Janine is a pale young woman with purple eyes and purplish hair, the latter being tied by a yellow band. She wears a scarf, a belt and white socks.

Janine wears a black shirt and dark pants. She also has some black gear equipped on her hands and legs.

Her outfit in Crystal is the same as it is in Gold and Silver.

She wears a black ninja suit, some bracers with pink outlines on her legs and arms.

Janine is an impressionable kind of girl, she follows her father's training and would come to his defense if his name gets slandered in any way. As promised, Janine took over Koga's leadership of the Fuchsia Gym. She would bring her father his meals outside the Pokémon League, this shows that she is loyal to her family besides her usual duties.

The name Janine comes from "ninja" with the syllables reversed.

Her Japanese name, Anzu, comes from 杏 (anzu, apricot, both because Koga's Japanese name comes from a different reading for the same kanji and because apricot seeds are poisonous).

She succeeded her father as the Fuchsia City Gym Leader after he got promoted to the Johto Elite Four. Originally, she wanted to be as good as her father in terms of using Poison types, but this was later changed into becoming better than him.

Her role in Crystal is the same as it is in Gold and Silver. 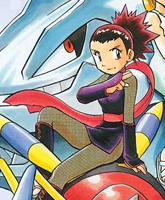 Janine's VS Sprite in HeartGold and SoulSilver

Janine's Battle VS Scene in Black 2 and White 2