Jamie McGonnigal is a voice actor in the Pokémon anime series. He is known as the voice of Barry and many other characters in the series. 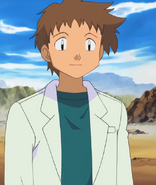 Grumpig (Season 12)
Add a photo to this gallery
Retrieved from "https://pokemon.fandom.com/wiki/Jamie_McGonnigal?oldid=1118920"
Community content is available under CC-BY-SA unless otherwise noted.