A Battle of Aerial Mobility!

Name
コジロウのマーイーカ
(Kojirou's Maaiika)
Notes
Depending on the context, "の" may be the possessive, unless it is used in the name of a character, Pokémon, or fossil.

A Battle of Aerial Mobility! (location: Kalos Route 4)
This Inkay is a Dark/Psychic-type Pokémon and the only Pokémon James from Team Rocket obtained in the Kalos region.

Inkay appears to be a sneaky and mischievous Pokémon, as he was seen stealing food from Team Rocket and then followed them in their balloon. He seems to love food (especially crossiants) and would often go out of his way to steal it. However, James at one point used this to his advantage to capture Inkay.

Despite being very mischievous and being a Pokémon owned by Team Rocket, he possesses their recurring trait of being very loyal to his trainer and comrades. His relationship with James has often proved affectionate. Inkay holds a deep grudge against the evil Malamar he encountered during his travels, namely for brainwashing James, and would do anything to stop it from fulfilling its dark plans of destroying the world.

Though often on the losing end like the rest of its team, Inkay has often proved a challenging opponent, having injured and matched key battlers such as Ash's Pikachu or other Pokémon on several occasions.

Inkay first appeared while Team Rocket was dining at a café in Lumiose City. As Team Rocket were busy celebrating news from Giovanni, Inkay stole their food and proceeded to eat it from under their table. While Team Rocket were on their balloon, the same Inkay from before approached them when they dropped their sandwich and sprayed ink at them. After Team Rocket cleaned themselves off, James scanned the Inkay to get some details about him and the Team Rocket trio attempted to battle it with Wobbuffet. However, James offered Inkay some food instead as bait. While Inkay was distracted, James threw a Poké Ball and caught him, much to the surprise of Jessie and Meowth.

Quickly becoming beloved by James, Inkay would prove to be a formidable battler afterwards, antagonising Ash's team effectively several times and even overpowering the forces of Officer Jenny. Nevertheless, he could not break the team's losing streak against the twerps. Inkay was also used to impersonate Ash's Pikachu in an attempt to cause havoc in a town in Heroes - Friends and Faux Alike!.

Since A Conspiracy to Conquer!, Inkay formed a grudge against the evil Malamar who used Hypnosis on him as well as his trainer, Jessie, Pumpkaboo, Ash's friends, Pikachu, Officer Jenny, Wobbuffet, and several Pokémon for its own selfish desires of conquering the world. After the destruction of the evil Malamar and fleeing into the sky, Jessie, James, Meowth and Wobbuffet later reveals that Malamar is the evolved form of Inkay which they are scared to see Inkay despite its pre-evolved form.

In Facing the Grand Design!, Inkay is seen eating crossiants with Meowth and Wobbuffet as James brought them for lunch while talking to Jessie. James also notices Inkay's favorite food is crossiants while trying to observe Ash and the group. Therefore, at the forest home of a wild Inkay and the good Malamar, Inkay was excited to see them until the sound of a speeding truck can be heard when it drove straight ahead and nearly side swifting on Ash and the group. Inkay senses that the evil Malamar is indeed driving it. Due to his grudge, Inkay angrily followed the truck causing James to chase it while Jessie, Meowth and Wobbuffet follows him. As Inkay follows the truck even climbing through Grace Tower, they discovered three trucks are already parked at the foot of the tower and inside the truck they are strange devices floating around the ground and James previously recognizes the devices until they found out it was the evil Malamar who drove the truck and is the same Malamar that they previously encountered in the Radio Observatory being teaming with two other evil Malamar. Upon encountering those three evil Malamar, Inkay becomes enraged to see them doing their evil schemes. After Officer Jenny tells them about the evil Malamar's plan, the sound of explosions can be heard and being confronted by two evil Malamar causing Inkay to get mad even further despite James tries to stop it from getting angry as Meowth translates in their language is that they are already at the final stage of their grand plan. The two Malamars eventually captures Jessie, Ash, Serena, Bonnie and Wobbuffet using Psychic. When it attempts to capture them using Psychic, Inkay manages to use its ink to blind the evil Malamar long enough allowing Clemont to release Bunnelby by using Dig to escape as James gets Inkay to escape with Clemont and Meowth.

When everyone was kidnapped by the three evil Malamars except for Clemont, Meowth, and James, he convinced the good Malamar and several other Inkays to fight against the evil Malamars, stop their plans and save their friends from mortal danger. However, during the rescue mission, one of the evil Malamar brainwashed Inkay and forced him to attack everyone. But James managed to save Inkay by breaking him free from the evil Malamar's hypnotic control and Inkay continued the battle to save everyone. After the evil Malamar escaped into the future, James attempted to release Inkay so he will live with the forest Pokémon near Grace Tower. However, Inkay refused to leave James since being with Team Rocket is what makes him happy. James cried tears of joy and promises to catch Pikachu together.

Throughout the episodes after being caught, Inkay always teaming up with Pumpkaboo to deal Ash and the group's Pokémon or Pikachu.

In A Festival Trade! A Festival Farewell?. Like in the previous episode when James, Jessie and Meowth poses as Ash, Serena and Bonnie, Inkay continues to dressed as Ash's Pikachu during the Gourgeist Festival until teaming up with Pumpkaboo who is now evolved into a Gourgeist. But they were blasted off soon by Pikachu's Thunderbolt and Braixen's Flamethrower.

After the travels from Kalos, Inkay was left at Team Rocket's Headquarters when James left for the Alola region. 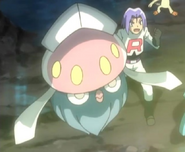 Inkay being controlled by an evil, rogue Malamar