Ivysaur's (pronounced IY-vee-sawr) appearance is very similar to that of its pre-evolved form, Bulbasaur. It still retains the turquoise skin and spots, along with its red eyes. Ivysaur's top fangs are now larger and are visible outside of the mouth. Also, its ears are now darkened to black in the center. Carrying the weight of the bud on its back makes Ivysaur's legs stronger. The most notable change is that the bulb is starting to bloom, with pink petals visible, and large leaves on the bottom.

Its blossom on its back grows larger in the sunlight. As the blossom grows, Ivysaur loses the ability to stand on its hind legs. The blossom produces a pleasant smell when it is ready to bloom, it means Ivysaur is ready to evolve into Venusaur.

Ivysaur is a playable character in Super Smash Bros. Brawl, as one of the three Pokémon usable by the Pokémon Trainer, or Red. Ivysaur is surprisingly agile in the game, being able to jump to a great height and attack with great speed. Its moves, based upon Grass-type moves in the Pokémon games, are Solar Beam, Vine Whip, Razor Leaf, and Bullet Seed. 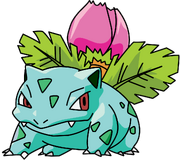 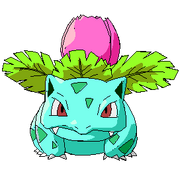 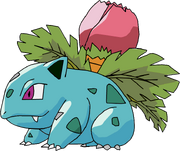 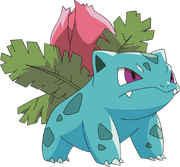 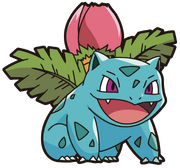 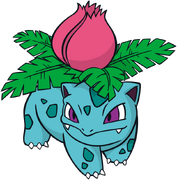 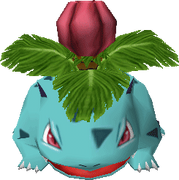 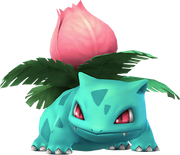 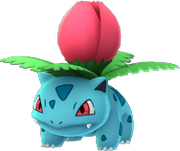