For other variants of Haxorus belonging to Iris, see Iris' Haxorus.

Name
アイリスのオノンド
Airisu no Onondo
Notes
Depending on the context, "の" may be the possessive, unless it is used in the name of a character, Pokémon, or fossil.

Name
アイリスのオノンド
Airisu no Onondo
Voice actor(s)
Minami Tsuda
Notes
Depending on the context, "の" may be the possessive, unless it is used in the name of a character, Pokémon, or fossil.

Prior to "In The Shadow of Zekrom!", received from Elder
This Haxorus is a Dragon-type Pokémon owned by Iris and was the first Pokémon she revealed to possess. He, as an Axew, has appeared alongside Iris in the first episode of Pokémon the Series: Black & White, "In the Shadow of Zekrom!"

Axew is usually very friendly, that he is able to make friends quickly with other Pokémon. Since he is being taken care by Iris from the time he hatched, their bond is really strong. He often express concern towards his friends, such as he showed his gratefulness when Emolga stopped his apple from rolling down a hill. Axew is best friends with Ash's Scraggy as they have a brotherly bond.

In Pokémon Journeys following his evolution twice from Fraxure to Haxorus, he now shows both his seriousness and determination to battle against Ash's Dragonite after he overpowers Ash's Dracovish with his powerful abilities. He also became sad and upset when he got lost to Dragonite from getting knocked out by its newly learned Draco Meteor and was comforted by Iris. Haxorus also develops a friendly rivalry towards Ash's Dragonite following his loss.

In Thrash of the Titans!, Axew was revealed to have evolved twice from Fraxure then to a Haxorus.

Haxorus being presented to Iris as a baby Axew 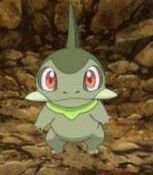