Iris, also known by her title as The Girl Who Knows the Hearts of Dragons, is the eighth and last Gym Leader of the Unova region in the Pokémon White Version only. Iris lives in Opelucid City, and specializes in using Dragon-type Pokémon. She will award the player the Legend Badge if he/she defeats her. In the two-year gap between Pokémon Black and White and Black and White 2, she has become the Unova League Champion.

Iris is a young, thin girl. She is dark-skinned with a medium brown complexion brown eyes and abnormal long purple hair, tied back with yellow bangles in thick ponytails that resemble the petals of an iris blossom.

Iris wears a cream-colored long-sleeved top with a pink collar and cuffs, a pink puffy miniskirt with a slit on the left side and a big ribbon over it. She also has white leggings with yellow colored ends at the legs, and pink and white yellow-strapped shoes with no socks.

Iris wears royal garments, similar to that of a princess. Her hair is now tied up in a small bun with large spike designs, and she has two rounded ringlets in each sides of her head. Her hair is tied in a bun also tied up in a long ponytail by a yellow bow. She wears a white and pink V-neck long-sleeved princess gown with flowing ribbons and frilly ends and a huge bright pink bow on her waist with a large pink ring to hold it. The gown also is open at the front, exposing Iris' legs and feet. Her sleeves are very large and long with pink cuffs. She wears a small golden crown on her head with two emeralds encrusted within the triangle-shaped sides. On her feet she wears white sandals with a round green gem encrusted in the center of each sandal.

Iris is a tomboyish, hyper young girl who loves adventure. She has an affinity for Dragon Pokémon and loves to train and play with them. She is a kind, helpful person who will bravely stand up against evil forces and help the player.

The name Iris comes from "iris", a type of flower. This follows the Japanese name of Drayden, her counterpart in Pokémon Black and White, who is also named after a type of iris.

In Pokémon Black and White, Iris first meets the player character in Castelia City, where she helps Bianca train her Pokémon. After defeating the Elite Four and Sinnoh League Champion, Cynthia, in Undella Town, Iris will visit the villa in the Summer season.

If Memory Link is performed, a flashback occurs when talking to Drayden. The flashback reveals how Iris defeated Drayden after a tough battle. Drayden then reminiscenced about when he met Iris the first time and how she was a special Trainer on the Village of Dragons when he was looking for a successor. Iris mentioned how different the Village of Dragons is in comparison to Unova and their relationship with Pokémon. Drayden then talked about how tough it was to be Trainer on his time without Poké Balls. The two go on to talk her experience battle Alder, and what she will do now as the new Champion. Iris claims she will be one that can encourage people with their Pokémon. Drayden gives her a new outfit. 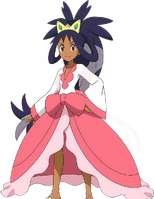 Iris in Pokémon the Series (anime)

Iris' VS sprite in Black and White

Iris' full VS. sprite in Black 2 and White 2

Iris at the Gym in Pokémon White