Inkay is a small amphibious Pokémon that resembles a squid or cuttlefish. Its body is round and blue in color, with a fringe of short tentacles forming its underside. Inkay has very large round black eyes and a small pink beak-like smiling mouth. It has a pinkish white-finned cap-like feature with four bioluminescent yellow spots atop its head. Two short white arm-like tentacles sprout from either side of its cap. When in battle, Inkay uses the luminescent yellow patches on its pink cap to hypnotize its foes.

Inkay can be evolved to a Malamar at level 30 while having a Pokémon Battle while holding the 3DS or Switch (provided the game is being played in Handheld Mode) upside-down.

Inkay appeared in "A Battle of Aerial Mobility!", when James caught him.

Inkay's name is derived from the words "ink" or possibly "inky", and "ika", Japanese for "squid." It may also derive from "okay." 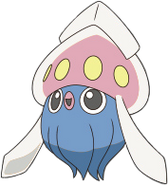 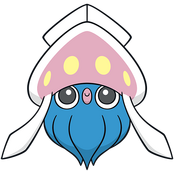 Add a photo to this gallery
← Slurpuff | Inkay | Malamar →
Retrieved from "https://pokemon.fandom.com/wiki/Inkay?oldid=1189413"
Community content is available under CC-BY-SA unless otherwise noted.