Indeedee is a bipedal, mammalian, vaguely sheep- or goat-like Pokémon. Its body is predominantly dark purple with white markings. They have brown eyes and white hands with three fingers. The male has horns pointing upwards while the female has horns pointing downwards. Both have fat, wide-hipped torsos, but the male's torso is tapered, more slender, and purple while the female's is rounded, plumper, and white. The male has blue marks between its eyes while the female has red marks above its eyes. Their feet are white and have three toes, but the male has more white than the female.

Both genders share the same trait: providing their masters with their most faithful service.

The Male Indeedee are based on butlers, while the female ones are based on maids. They also share some traits with sheep or goats. Both of them are based on Lares, ancient deities in the Roman religion that did house duties in exchange for praise. They are often depicted in pairs (similarly to how male and female Indeedee are usually together). They are also often seen holding rhyta, containers shaped like goats. They may also take inspiration from Brownies, spirits in British folklore that snuck into houses at night to do farming and household work. As both genders of Indeedee are sheep-like and have plump lower torsos, they may also be based on Fat-tailed sheep.

Iessan is a portmanteau of "yes" and "-san," a Japanese honorific roughly equivalent to "Mr." or "Mrs." It may also come from "yes-man."

The names might reflect the stiff and stereotypical representations of butlers and maids in comedies. 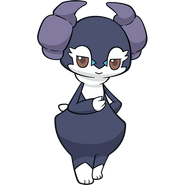 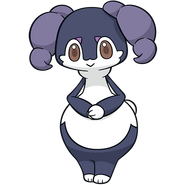 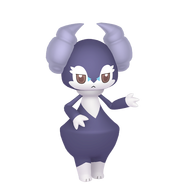 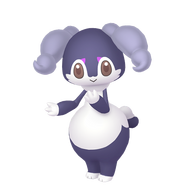